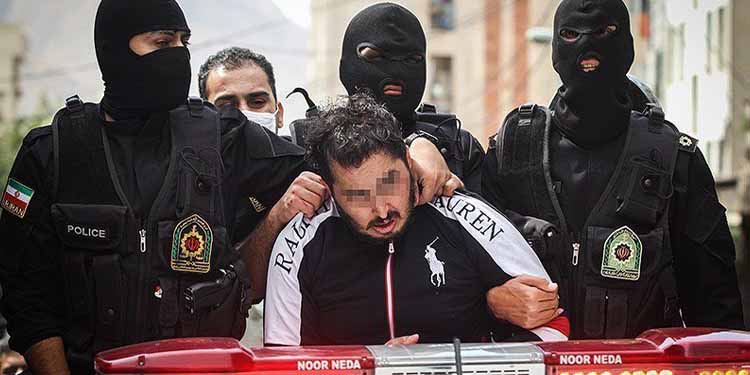 The state security forces publicly beating and humiliating a young man accused of stealing mobile phones. Several men were in the streets of Tehran and Rasht in a humiliating manner in the past day.

The State Security Force agents have been parading people in the streets of Iran over the past weeks, humiliating and torturing them psychologically in the open.

Iran’s state media have published videos and reports of the public parading and humiliating locals who were charged with “public thuggish behavior”.
The men are paraded in police trucks, while masked security forces slap and manhandle them, forcing them to “repent” in public.

In some of the videos the detainees can be seen being forced to use vulgar words directed at themselves to “apologize” for their actions.

This inhuman treatment aimed at terrorizing the public violates the international law and all principles of human rights.

Security forces arrest these young men under the pretext of dealing with “thugs and hooligans.” These young men do not stand any trial before being paraded around the city, and being brutalized and humiliated in front of the public by hooded agents.

The humiliating “parades” follow the regime’s repressive plans to station IRGC hit squads in all streets and neighborhoods.

Hossein Rahimi, Tehran’s Police Chief, declared on September 17, 2020, that they will deal harshly with detainees, whom he described as “thugs and hooligans.” He reiterated, “We will break their neck and deal with them in the harshest manner according to the law.”

On the same day, the notorious Chief of Judiciary, Ebrahim Raisi, told the Supreme Council of the Judiciary, “Deal decisively with villains, thieves and robbers. Prosecutors should cooperate as in the past. There should be no legal leniency towards villains.”

In this way, the highest officials of the Judiciary and the State Security Force officially sanctioned torture of detainees through humiliation, brutalization, insults and violent treatment, in the streets and in front of the public.

The Young Journalists’ Club called this “the Police’s Plan to deal with thugs and hooligans.” The YJC wrote that “a number of the accused detainees were paraded in these districts.”

Another incident was carried out on October 1, 2020, in the city of Rasht, capital of the northern Gilan Province. The SSF agents paraded a number of young men arrested during a fight at Pour-Sina Hospital. They brutalized and humiliated the men in public.

In another example on October 6, 2020, a detainee accused of stealing mobile phones was brutalized in public in Moshirieh district of Tehran. He was beaten and hit by a hooded agent dressed in black.

ISNA news agency set up a photo gallery in August of three persons who had been paraded in Mehrabad District of Tehran. The young men were accused of engaging in a brawl and creating insecurity in Shamshiri neighborhood of Mehrabad. The Security Police arrested them.”

Humiliation and violation of human dignity of citizens, whether they are accused or convicted by law, runs contrary to humanitarian principles. The State Security Force, however, continues to parade Iranian citizens in public.

These measures by the Iranian regime are intended to create fear among people and terrorize the society.

The regime’s displays of public humiliation have outraged Iranians who have compared the parading of Iranians on the streets with similar measures carried out by ISIS.

With the increase of the public degradation of “thugs” on the streets of Iran, a top military intelligence official implied that the regime’s Supreme Leader was behind the new crackdown measures. The Deputy of Intelligence and Security of Iran’s Armed Forces said the regime had initiated an organized plan confirmed by the country’s Security Council to “fight thugs and hooligans”. Majid Mirahmadi said the new initiative was carried out upon the “demands” of Ali Khamenei.

“As the representative of the Chief of Staff of the Armed Forces I announce today that the main demand of the Supreme Leader and the Commander in Chief is drying out the roots of lack of security in the community,” he said in a meeting in Isfahan last week.
During the Isfahan meeting with Tabatabai Nejad, the Head of Friday Prayers and Khamenei’s representative in Isfahan on October 2, the regime’s plans to “deal with troublemakers” was discussed in length.

Mirahmadi implied that the reason behind the crackdown was that “thugs were supported by anti-revolutionary groups” and took part in nationwide protests, the only force powerful enough to bring down the regime. The senior intelligence military official said the regime’s Security Council had ordered that bases be established in the provinces and cities to counter “thugs”.

Mirahmadi said the country’s security depended on the fight against “thugs”. He implied that the public degradation of Iranians showed the “resolve of the Chief of Police” and expressed “gratitude” for the crackdown. The senior military intelligence official said dealing with “thugs” was not only up to the police and that the regime’s Armed Forces would also play a part in the suppression.