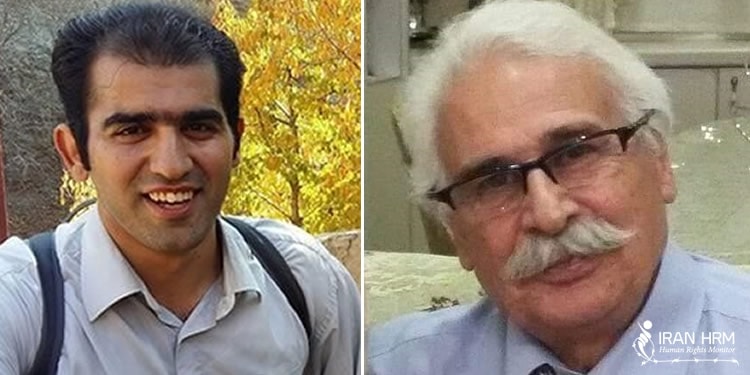 The political prisoners have experienced fever, headache, lethargy, the loss of smell and taste since about a week ago.

In addition to his age, 74-year-old Banazadeh Amirkhizi has serious medical conditions, including heart failure which puts him at particular risk of severe illness or death if he contracts COVID-19.

The other political prisoner, Payam Shakiba suffers from migraines, which has made his symptoms more severe.

There have been several reports on overcrowded, unhygienic and unsanitary conditions inside Evin Prison that put the prisoners at greater risk of COVID-19 infections.

Prisoners have not been provided with sufficient soap or other sanitary products. Masks are sold at a very high price in the prison store and many prisoners cannot afford it.

Additionally, political prisoners have been systematically denied adequate medical treatment, which leaves
them more vulnerable to the Coronavirus if they contracted it.

Mohammad Banazadeh Amirkhizi and Payam Shakiba, along with another political prisoner Majid Asadi, were transferred from Rajai Shahr Prison to the Ward 209 of Evin Prison, run by Iran’s Intelligence Ministry, on August 22, to be interrogated about a new case opened against them during their imprisonment.

A veteran political activist, Banazadeh, 74, was arrested by the Intelligence Ministry on November 30, 2009, supporting the People’s Mojahedin Organization of Iran. He was freed in November 2014 after serving a five-year sentence.

In a ruling issued on November 27, 2017, Judge Mashallah Ahmadzadeh of Branch 26 of the Tehran Revolutionary Court sentenced Banazadeh to 11 years in Evin Prison and two years in exile in the city of Nikshahr, Sistan and Baluchistan Province.

The sentence was upheld in the appeals court in July 2018.

Payam Shakiba, had been previously arrested on July 8, 2008, for exposing sexual misconduct against a female student by a senior administrator at the Zanjan University campus, where he was a student at the time.
In March 2010, Shakiba was sentenced to one year in prison for “causing public anxiety” and “instigating illegal gatherings against national security” and barred from returning to university for two semesters. Upon appeal, his sentence was reduced to six months in prison, which he served from November 2010 to March 2011.

He was arrested again in 2016 and and was tried in November 2017.
He was sentenced to six years in prison.

Mohammad Banazadeh Amirkhizi and Payam Shakiba along with Majid Assadi, were summoned to the Evin prison prosecutor’s office in July 2020, and were told that new charges had been brought against them while they were in prison.

The three political prisoners have been charged with “propaganda activities against the regime”.