A study of the arbitrary killing of porters in western Iran 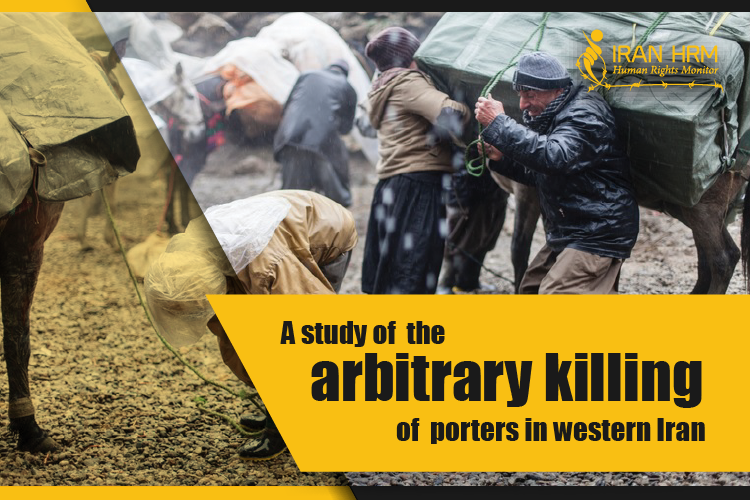 Every year, hundreds of unarmed porters are killed or injured by Iranian security forces near the western borders of Iran mainly in the provinces of Kurdistan, West Azerbaijan and Kermanshah. The killing of porters has dramatically increased in recent months. At least 16 back carriers and petty tradesmen have been killed and 12 wounded only during the months of July and August. This is while 49 got killed and 47 wounded throughout 2016, meaning an average of four porters killed per month.

Killing of porters, as the poorest people who have to resort to this type of hard work to make ends meet for their families, has sparked a wave of outrage among the public.

In protest to these killings by Iran’s Revolutionary Guards and the State Security forces, demonstrations broke out in the western city of Baneh. A large number of residents gathered outside the Governor’s Office on Tuesday, September 5, demanding an end to the ongoing attacks against the porters.

Back carriers are poor people who transfer goods such as fuel, cigarettes, electric equipment, clothing, tires, etc. with great difficulty and at a high risk to their lives to earn a living for their families. They sometimes have to transfer 100 to 150 kilograms on their backs in the mountains and valleys, in hot summer or cold winter.

Border porters include children, youths and the elderly. In addition to natural disasters such as avalanches and frostbite, or accidents like drowning in the river or falling into the valleys, they are constantly threatened by direct shooting of the regime’s security forces.

According to Article 3 of the Law on the Use of Weapons by the State Armed Forces, the SSF shall not use firearms against persons except in self-defense or defense of others against the imminent threat of death or serious injury.

The third amendment to this law states: “Armed forces cannot, in any way, target a defendant on the spot.”

Based on the above law, experts and lawyers argue that firing at Kurd porters is in violation of the law.

According to the Islamic Punishment Law, the crime of these porters amounts to “smuggling” and sometimes “illegal transition across the border,” which are punishable with a few months of prison sentence or payment of fine.

Ahmed Shahid, the former Special Rapporteur on the situation of human rights in Iran, in his report expressed concern over the killing of porters as “extrajudicial killings.”

He had already pointed to “systematically killing” of the porters and their severe conditions.

“Indiscriminate killings of kulbaran (border couriers), in violation of the domestic laws and international obligations of the Islamic Republic of Iran, continue to be reported. Human rights organizations report that at least 70 border couriers were killed and 68 wounded by government forces between March 2011 and April 2012. These reportedly unarmed couriers from the Kurdish-dominated provinces appear to engage in smuggling such items as tea and tobacco because of inadequate employment opportunities,” the report reads in part.

This pressure on the deprived people comes while over $20 billion worth of smuggled goods enter the country annually which amounts to one third of country’s official trade.

It is crystal clear that such massive volume of systematic smuggling and import of goods to the country is carried out through organized networks and government-backed institutions such as the Revolutionary Guard Corps who are in charge of the country’s security and control a large part of the economy, trade, import and export.

At a press conference in London on March 7, 2017, the Iranian resistance(PMOI/MEK) blew the whistle, revealing that 90 Iranian ports, which amount to 45% of the total number of ports in Iran, are used for massive smuggling efforts. These ports are mainly at the disposal of the IRGC.

Such enormous contraband trade of goods and currency carried out under the eyes of the Iranian Supreme Leader Ali Khamenei, the Revolutionary Guards (IRGC) and other security and intelligence entities eliminates one million and 750 thousand job opportunities a year. (The state-run Tabnak news agency, March 7, 2015)

The hardworking workers are amongst the millions of people who, according to the state media, comprise the “army of the unemployed.”

The following figures have been extracted from the state media and official government announcement to reflect the extent of persecution of border couriers.

Below are some examples of the killings of porters taken place in 2017: Iran: Two executions including a public hanging in Ilam

Iran: Two prisoner hanged in the cities of Shiraz and Khoram Abad