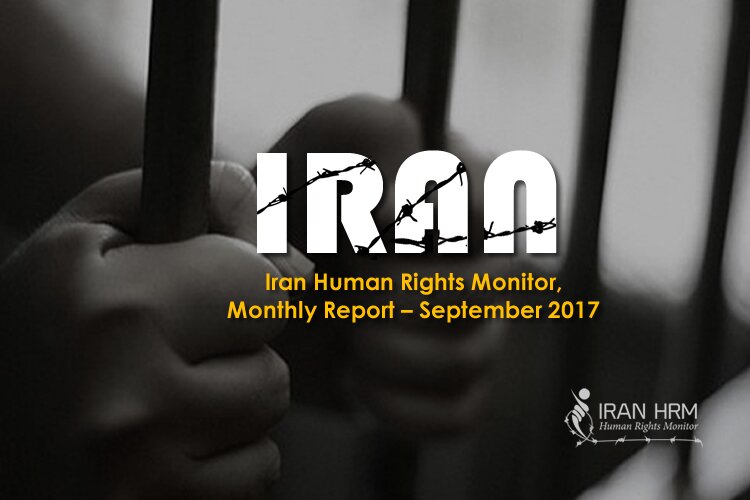 In September systematic violations of human rights continued, including a growing wave of public and secret executions, hand amputation, floggings, torture to death of detainees and killing of porters.

In the following report Iran Human rights monitor tries to announce a series of human rights abuses in September.

Iran Human Rights Monitor have registered 42 executions in the month of September from which 22 have been made public by the state media. Therefore, the actual number must be considerably higher.

From all executions seven were carried out in public and others were implemented in the prisons of Ardebil, Borujerd, Khorramabad, Mashhad, Zanjan, Kerman, Qom, Karaj, Qazvin and Tabriz. Amongst those executed there is a woman identified as N.A. who was hanged in the Central Prison of Zanjan, in northwestern Iran. The state-run Mehr news agency reported her execution on September 19, 2017.

On September 19, two men including a 23-year-old prisoner were hanged in Ardebil Prison while they were both handcuffed and shackled. The young man had been sentenced to three years behind bars, however later he was sentenced to death on new fabricated charges.

An audience of fellow inmates were assembled to witness their executions.

These inhuman acts are carried out on the order of prison officials aiming at tormenting inmates before their executions.

On September 20, at the same time as Iran’s President Hassan Rouhani delivered his speech at the United Nations General Assembly, 14 executions and 3 death sentences were carried out.

According to human rights monitoring reports, from 170 prisoners held in Ardabil prison, 25 are on death row whose death sentences have been upheld by supreme court. Many of them were under the age of 18 at the time of committing the crimes.

Seven porters were shot dead by the regime’s border guards.

An 18-year-old juvenile was shot dead in the northern city of Abadan.

A young Baluchi man was shot dead in Khash region in Sistan and Baluchestan Province.

In the last weeks of September, the warden of Zahedan Central Prison ordered to transfer a 22-year-old prisoner identified Isa Barahouei to solitary confinement where he had endured torture by prison guards. Subsequently the inmate committed suicide in solitary cell to end his suffering caused by ongoing torture.

According to reports released by Iran’s Human Rights Monitor, Iran continued to use of cruel punishments, including floggings and amputations. Following are some instances of such inhuman acts of torture.

The Deputy Prosecutor of Qom announced the implementation of hand amputations for three people charged with robbery, according to the state-run TV Website report on September 21, 2017.

In another development two young men were sentenced to have their fingers amputated for stealing from a meat store in Tehran. They were arrested while carrying bags of sausages, the state-run Roozplus Website reported on September 19, 2017.

A total of 983 arrests have been registered in the month of September, including 513 social arrests, 60 political motivated arrests, 137 arbitrary arrests and 273 arrests on religious grounds.

Political prisoners in ward 10 of Gohardasht Prison, switched their 40-day hunger strike into a political fasting on September 8.

Health condition of the striking detainees is deteriorating, as they suffer from loss of balance, low blood pressure, low heartbeat and other health problems. The prison Warden however, issued a circular on September 9, imposing strict pressures to the prisoners.

Some of the prisoners including Saeid Shirzad, Reza Shahabi and Mohammad Nazari continued their hunger strike and after 60 days their health condition reported dire.

Prisoner of conscience Soheil Arabi, switched to a dry hunger strike on September 23, protesting his detention and pressures imposed on his family. No information is available on the status of Kurdish political prisoner, Ramin Hossein Panahi, who was injured and arrested by IRGC forces. Officials however refused to disclose his fate or whereabouts and no security authority have responded to his family. Hassan Jafari, husband of political prisoner Maryan Akbari Monfared said in an interview that his wife needed medical treatment but that Evin prison authorities refused to allow her to go to the hospital for treatment. “Despite her being in prison for close to eight years, she is still denied the right to a prison leave and does not enjoy any of the rights she’s legally entitled to”, he added. The mother of political prisoner Atena Daemi, who is detained in Evin Prison, said that her daughter had to undergo gallbladder surgery at the Khomeini Hospital but refused to be hospitalized after the head of prison specified that she had to have handcuffs and foot shackles the whole time she was in the hospital.

Suppression of Religious and ethnic minorities

The new academic year started in Iran as Suppression of Religious and ethnic minorities continued and dozens people have been deprived of studying at university in various cities of Iran, despite attending the university entrance examinations. At least 120 Baha’i citizens who participated in the 2017 General University Admittance Test were denied entry to university and higher education due to their religion.
After entering their name and volunteer number (in the affiliated website), the young men and women encountered a message which read, “Dear volunteer, refer to the Education Accountability Organization due to a violation in your case.”

According to the third article of the resolution approved in 1991 by the Supreme Council of the Cultural Revolution, which was approved by Khamenei, “at universities, both at the entrance and during education, if it is established that they are Baha’is they are to be deprived of education.”