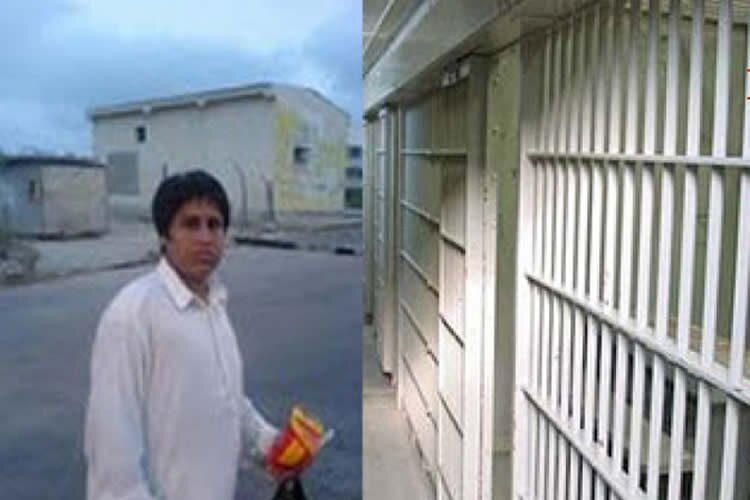 Political prisoner Mohammad Saber Malek Raisi has gone on hunger strike since November 29 while in solitary confinement, protesting the inhuman conditions and tortures he has been enduring in Ardabil Prison. Despite heart disease caused by torture he announced that he is not going to stop the hunger strike until his demands are met.
Malek Raisi has suffered from fever and severe pain in his chest since the 22nd day of the strike, but prison authorities have not allowed his hospitalisation outside of Central Ardabil Prison. To conceal the exiled political prisoner‘s condition they also denied his contact with his family.
On the morning of November 29, young Baluch political prisoner Mohammad Saber Malek Raisi, who is detained in the Central Ardabil Prison, was taken to the Quarantine Section where he was tied to a pole and beaten. Farhad Nowrozi, the head of the Interior Section, Sadegh Zadeh, a prison guard officer and a number of soldiers severely beat the young prisoner with sticks and whips. The beating was so intense that he was bruised and battered in his face, back and stomach. Malek Reiesi went on a hunger strike on November 29 in protest to this inhumane treatment.
Last year on December 18, 2016, he was tied to a pole in the prison’s courtyard and was left there for 14 hours in the freezing temperatures after being beaten. Malek Reiesi was arrested when he was 17 years old and was tortured. He is currently 25 years old and is one of the youngest (political) prisoners in Iran.
Malek Reisi wrote a letter to Ms. Asmah Jahangir, the Special Rapporteur on Human Rights in Iran, detailing the condition he has been enduring in prison and being insulted by the Central Ardabil Prison Protection and Intelligence Office.
“On Wednesday November 27, my religion and beliefs were insulted by the Central Ardabil Prison Protection and Intelligence Office and I was then taken to the office of the head of prison guards. While there, the head of the section and the head of the guards tied my hands and feet and beat me with a baton. While punching and kicking my face, they used profane language against my family to insult me. They then transferred me to quarantine while still tied up with a bruised body.” The letter reads in part.
Mohammad Saber Malek Raisi was arrested in 2009 at the age of 15. He was sentenced to 15 years behind bars for “collaboration with opposition groups.”
His family however have frequently stressed that their son is innocent and is considered hostage of the Ministry of Intelligence to force his elder brother to hand himself in to the authorities.
Security officials told the family that if their other son Abdul Rahman surrender himself to security forces, Mohammad will be released. Abdul Rahman, fled the country in 2009 fearing for his life after he refused spy on Sunni scholars and Balouchi tribes.