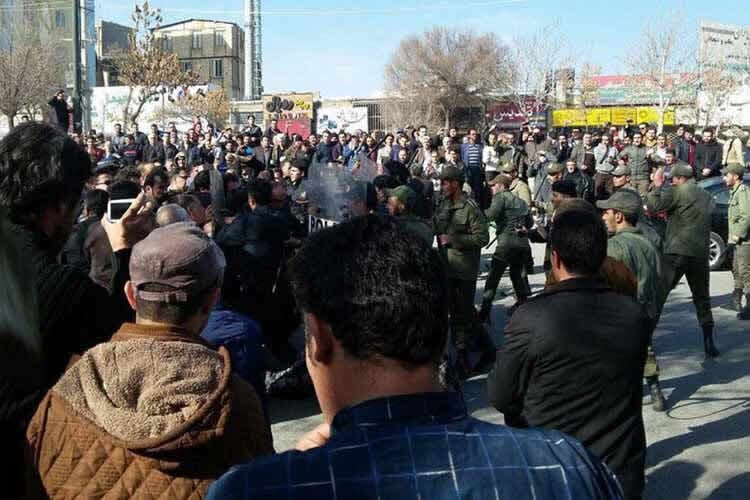 The Commander of the Revolutionary Guards Corps said on January 3, 2018, that many of the rioters who were arrested after Friday were at the center of the seditions. According to the state-run Tasnim news agency.

“They were all trained by anti-revolutionary forces and hypocrites (PMOI) and they will be severely dealt with,” Jafari added.

“The enemies quickly used cyberspace and came to the scene to create sedition,” he said. “The lack of control on cyberspace, which is managed overseas, and the shortcomings of the authorities in controlling this space has aggravated the turmoil.” “Once cyberspace was controlled, we saw a decrease in the intensity of the seditions,” he added.

The Deputy Commander of the Revolutionary Guards Sarallah Base on January 2, 2018, stressed that they would not allow the Tehran unrest to continue, according to the state-run ISNA news agency.

“If Tehran’s unrest persists, authorities will definitely make decisions, and then everything will be over,” Ismail Kosari added.

It is worth noting that on the same day the state-run Tasnim news agency cited the Head of Tehran Revolutionary Court as saying that arrested protesters would be charged with “enmity with God.”

Hojatoleslam Musa Ghazanfarabadi, head of the Tehran Revolutionary Court, said that those who were arrested from the third day of the unrest would receive a heavy sentence.

“Given the Ministry of the Interior’s announcement that the gatherings are illegal, they (protesters) have deliberately and knowingly gathered, rioted and broken the norms,” he said.

“The charges of some of the arrested persons may be Moharebeh (enmity with God which could carry the death sentence), acting against national security, destroying public property, destroying people’s property, beatings and other charges… Many of these people were arrested in Tehran and other places and will soon be tried,” Ghazanfarabadi added.

“The videos of the defendants will be broadcasted in court for them and there will be no way out; therefore, families should be watchful of their children and if they are given heavy sentences, expressing regret might not be effective.”