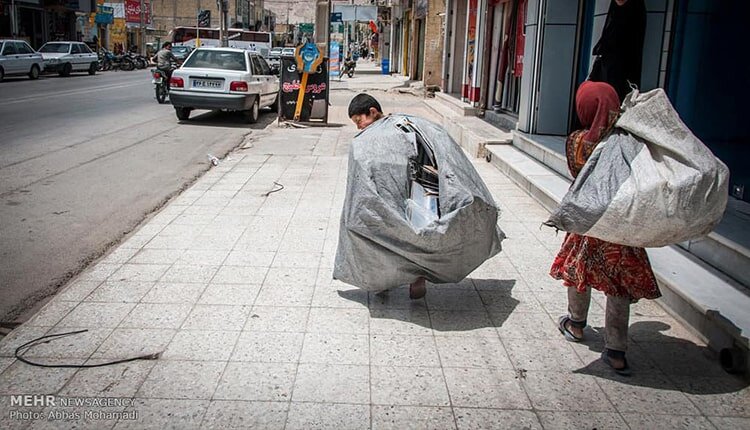 One of the tragic social ills in Iran is the problem of child labor.

In a meeting held in Tehran on June 12 which marked the World Day Against Child Labor, Fatemeh Qassemzadeh, head of the Network Aiding Child Laborers, revealed, “The children who come to Tehran from other cities with no identification papers are held in quarantine facilities, where they are detained for a maximum of 23 days until their identities are verified. Unfortunately, many children remain in such quarantine facilities for months and years, without establishing their identities.”

This was part of a report published on this meeting by the state-run ILNA news agency on June 15, 2019.

Child labor is a serious issue in Iran where the number of child laborers is estimated to be between 3 to 7 million, with some 60,000 children added every year.

Another state-run daily, Ebtekar, on June 13 wrote that many child laborers are engaged in scavenging through garbage and in doing so, they are exposed to dangerous illnesses.

Tehran’s municipality has relegated the collection of the city’s garbage to private companies which in turn recruit child laborers to do the job for them.

Citing a researcher, Ebtekar wrote, “A large number of Iranian children and their families in Tehran are entering the cycle of collection of garbage. This is because of lack of occupation and the availability of garbage.”

Ebtekar wrote some 14,000 persons work to collect the city’s garbage, 4,700 of whom are child laborers.

On May 26, another state-run publication, Jiroft-e Man, wrote, “Prices are skyrocketing. High prices have reached a climax, and people become hungrier every day.” In such circumstances, it is all but natural that families have their kids leave school and in the next step go to work to help earn the family’s living.

On June 4, the state-run Tabnak website wrote, “To make ends meet has become the main concern of many families these days. Wage earners who could provide a whole month with their salaries, can now pay for only 10 days.”

The question is how are they going to provide for the other 20 days? Perhaps their children are the way out.

So, every child laborer represents a family that is poor and cannot earn their living.

On March 18, 2019, the state-run ROKNA news agency reported on the deaths of a sister and brother, 9 and 11 years old, in a poor neighborhood in South Tehran, in the farmlands near Shahr-e Rey.

The siblings were child laborers. Sadouri peddled on the streets and her brother, Rashid, worked on the farmland to provide for their mother and their other siblings.

Some 200 families live in this neighborhood where the houses are made of mud and wood, and not resistant against rain and snow. Sadouri and her brother, Rashid, lived in one such house.

On the night of March 17, heavy rains caused the ceiling of their house collapse on their head. Their mother and siblings ran out, but Sadouri and Rashid remained under the debris.