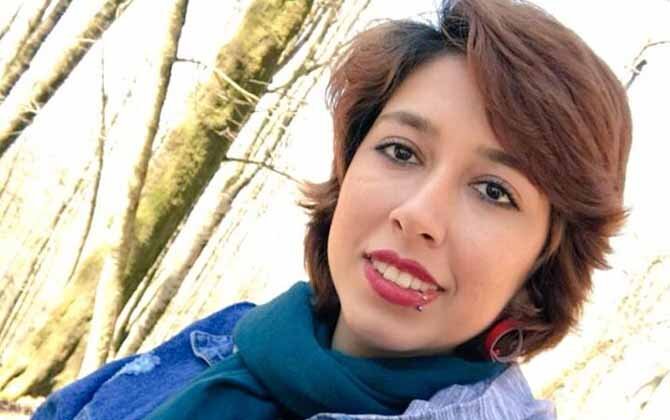 Iran sentenced Saba Kord Afshari, a civil rights activist to 24 years behind bars of which she will serve 15 for protesting compulsory veiling.

Saba Kord Afshari stood trial on August 19, 2019, and was charged with “spreading corruption and prostitution by taking off her hijab and walking without a veil,” “spreading propaganda against the state,” and “assembly and collusion.”

The verdict was issued by the branch 26 of Tehran’s Revolutionary Court and the lawyer of Ms Kordafshari was informed about it on August 27.

Her sentences were increased by one-half because of “numerous charges and previous records.”

The maximum sentenced to be implemented for her is 15 years for “promoting corruption and prostitution by removing her veil and walking in the streets without the veil.”

Saba Kord Afshari was repeatedly pressured to make video confessions, something that she strongly resisted and refused to do. The Intelligence Ministry even arrested her mother, Raheleh Ahmadi, to bring further pressure and force her to force her make false confessions.

Saba Kord Afshari was first arrested while attending a protest assembly on August 2, 2018, in front of Daneshjoo (Student) park in Tehran and taken to Qarchak prison. She was later transferred to Tehran’s notorious Evin prison.

Right after her arrest, Kordafshari and several other detainees posted a message on their experience and called for help via a cellphone from inside a State Security Force van as they were being taken to jail.

Then, she was sentenced to one year in prison for “disruption of public order” and was transferred to the women’s ward of Evin Prison.

Kord Afshari was released in February 2019, while only 2 months were left until the end of her sentence.

After being released from Evin Prison, Saba Kord Afshari and Yasaman Aryani, another civil rights activist and political prisoner declared that being granted amnesty for their release was only a spectacle by government officials.

Kord Afshari said, “When I saw the situation of prisons closely, especially in Qarchak, I came to the conclusion that we in Iran only have the name of human rights. In fact, in Iran, there are no rights for humans, let alone respecting human rights in the prisons.”

Saba Kord Afshari was arrested again in early June 2019. Holding her arrest warrant, security forces went to her residence in Tehran on June 1, 2019.

They inspected the house, confiscated some of her personal belongings including her cellphone and laptop computer, and took her to the detention center on Vozara Avenue.

Saba Kord Afshari was taken to Qarchak Prison of Varamin in June. Then, on July 2, she was taken to the Ward 2A in Evin Prison which belongs to the Intelligence Department of the Revolutionary Guards, and put under pressure to make forced confessions. Subsequently, she was returned to Qarchak and eventually transferred to the women’s ward of Evin on August 13, 2019.