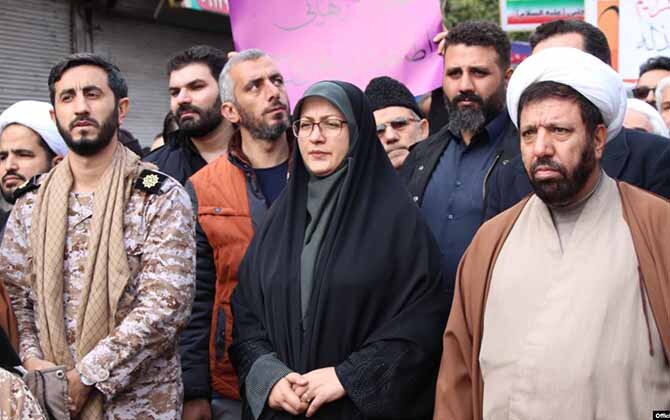 The governor of Qods city in west of Tehran said that she ordered the state security forces to open fire on protesters who had entered the governor’s building.

Speaking with the state-run Iran daily, on December 1 Leila Vaseghi admitted that Revolutionary Guards (IRGC) forces had been active in suppressing the protesters from day one of the November 2019 protests.

In her brazen remarks, vaseghi explained that a few guards were present at the building, when enraged people advanced towards the governor’s headquarters.

The protesters who had entered the building challenged the guards saying, “Shoot us if you can, the protesters chanted; since they knew that the guards had no permission to open fire,” Vaseghi described while her being so calm was striking.

“As the governor, I immediately ordered the security guards to shoot anybody stepping inside the governor’s building,” Vaseghi arrogantly added.

Governor of Qaleh Hassan Khan admits that she ordered security forces to shoot protesters who entered the Governor's Office in #IranProtests The UN Security Council must declare regime officials for committing crimes against humanity. They must face justice @UNHumanRights pic.twitter.com/TFIOQCg1No

Iran’s nationwide protests started after the regime tripled the price of gasoline on November 15. Following the protests, Supreme Leader Khamenei called protesters “hooligans” in a televised speech. During the next few days, the regime mobilized all its forces against protesters, opening fire on gatherings of more than 10 people in some parts of Iran.