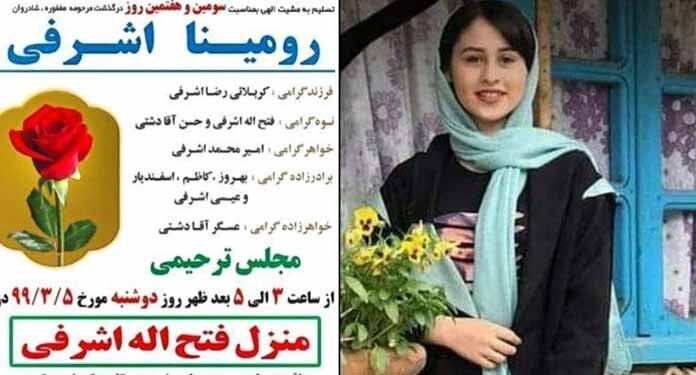 A 13-year-old Iranian girl was beheaded in her sleep by her own father, after trying to elope with her boyfriend. Romina Ashrafi is one of the victims of honor killings in Iran which are sanctioned and institutionalized by the laws of the clerical regime.
The incident occurred in a small town of about 5,000 people in the northern city of Talesh in Gilan Province.
The victim, had run away from home following her father’s opposition to her marrying a Sunni man she had “fallen in love with,” according to local Iranian media outlets.
But she was found and returned home by the police despite her insistence that her father was a temperamental person and her life was in danger at home.
On the night of May 21, 2020, when Romina Ashrafi was asleep, her father took a sickle and cut her head from the back of her neck.
After killing his daughter, the father, sickle in hand, went to the police station and confessed to the murder.
Romina Ashrafi’s father has been arrested, the governor of Talesh told the state-run IRNA news agency on Tuesday, adding that “the details of this case will be made public after the legal process.”
According to the clerical regime’s Penal Code, Romina’s father will not face the common punishment of “retribution” (Qesas) which is regularly handed down for those convicted of murder.
Article 220 of the Islamic Penal Code states: “the father or paternal grandfather who kills his child… will only be sentenced to pay the blood money to the heir of the victim.”
The murder has been widely condemned by Iranians on social media, prompting bitter debate over honor killings in Iran which are condoned under the Constitution.
A poster announcing the death of Romina Ashrafi, has been widely circulated on social media with the name of her father as the “mourning party”.
The announcement has created a wave of hatred and criticism among social media users.
At the same time, the Maidan website has interviewed the man who had eloped with Romina. His name is Bahman Khavari, and he is 28-year-old.
The exact figures for honor killings in Iran are unknown. In 2014, a senior police official at the time, said that honor killings made up 20 percent of the murder cases in the country.
“According to statistics, in 2013, 18.8 percent of homicides were motivated by honor and religion-related excuses, and the provinces of Khuzestan, Fars, and East Azarbaijan are among the provinces with the highest number of such homicides”, Khabar Online reported.
On May 13, 2020, just six days before Romina Ashrafi’s murder, the Baluch Activists’ Campaign reported that Hajareh Hosseinbor, a young Baluch woman, had been murdered by her husband. Her husband’s relatives described the murder as an honor killing, but Hosseinpor’s relatives and neighbors claimed her husband was a drug addict, and that he used to beat her.
Hajareh lived in the town of Gasht, 65 kilometers from the city of Saravan in Sistan and Baluchestan Province (southeastern Iran). She studied up to the 8th grade and was not allowed to finish high school. She was compelled to get married when she was 16. She had a 2-year-old son.
Hajareh was regularly battered at home by her husband, Esmail. He beat her up and burned her by hot wire. She had told her family about this, several times, but they ignored her and did not take any action.
Finally, in the evening of May 4, 2020, just after the sunset, Esmail dragged Hajareh out of their home. A few hours later, he abandoned her battered, semi-dead body outside a hospital and ran away.
A hospital nurse said when Hajareh was taken inside, her digestive tract had been burned by the acid forced down her throat. She was virtually unconscious and could hardly breathe. Her head was full of thorns and both of her arms and hands had been pounded by stone.
According to this nurse, because of the acid poured into her mouth, Hajareh had no tooth remaining and many of her bones had been broken, the state-run media reported on May 23, 2020.
Not only violence against women, domestic violence and honor killings have not been criminalized in the Constitution and other laws of the clerical regime in Iran, but they are sanctioned and institutionalized.