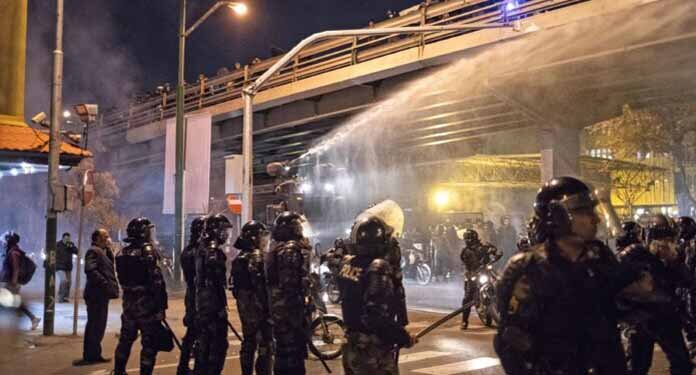 While the Coronavirus has been ravaging in various provinces across Iran, the regime’s security and judicial apparatus have heightened their persecution of minorities and political and civil rights activists.

In May, many prisoners who were temporarily released have once again been returned to prison, aggravating the already horrid conditions in Iran’s notorious prisons.

This is while there have been several cases of COVID-19 contagions, and even deaths from the virus in various Iranian prisons including Qarchak Prison, Urmia Central Prison, Sheiban Prison, Tehran’s Evin Prison, the Greater Tehran Penitentiary, and Mashhad’s Vakilabad Prison in northeastern Iran.

There have been reports on numerous rights activists, lawyers and peaceful protesters who got imprisoned or brutalized in prison during the month of May. Some were handed down heavy sentences and others transferred to prison to serve their sentences.

An appeals court sentenced Nasrin Javadi, a retired worker to five years in prison. She was initially sentenced to seven years in prison and 74 lashes. She was arrested on May 1, 2019, while attending a peaceful International Workers’ Day gathering in the capital.

The Iranian regime has sentenced several people to prison and lashes for protesting Iran’s downing of a Ukrainian passenger plane.

So far more than 16 protesters have been handed prison and flogging sentences in Amol alone. They had been arrested by the IRGC’s Intelligence Organization on January 12, 2020, in the city’s main square where they had gathered to commemorate the victims.

They included Shora Fekri, Mohsen Rezaei, Meysam Khalili, Mehdi Raei and Salman Farrokhi, who on April 24 were sentenced to five months each in prison for “propaganda against the state” by Branch 1 of the Revolutionary Court in Amol presided by Judge Morteza Mahdavi.

Eleven others – Amin Forouhi, Ali Shokri, Azadeh Javani, Aydin Javani, Ayda Javani, Alireza Mohammadnejad, Fereshteh Mahmoudi, Hossein Mostafania, Meysam Khodabandehlou, Hamid Mohammadi Irani and Mohammad Reza Shojaei – were sentenced to eight months each in prison for “propaganda against the state” by Branch 1 of the Revolutionary Court and an additional five months in prison and 20 lashes each ordered by the Criminal Court in Amol for “disturbing order.” The sentence issued by the Criminal Court has been suspended for one year.

All 16 individuals were denied legal counsel during their trials.

In a new wave of crackdown in Iran, the Ministry of Intelligence and Security (MOIS) and the IRGC Intelligence Organization have begun arresting and summoning large numbers of young activists, especially the families and supporters of the People’s Mojahedin Organization of Iran (PMOI/MEK).

Many have been sent to prisons, and some have been temporarily released on bail while signing a form pledging not to participate in any anti-regime activities.

Among those arrested were Ali Younesi and Amir-Hossein Moradi, award-winning students at Sharif University of Technology, who have been arrested and detained on trumped up charges of having ties with the PMOI/MEK.

Amnesty International on May 12, called Ali Younesi a “prisoner of conscience targeted solely for his family ties” and warning that he is “at risk of torture or other ill-treatment.”

NCRI said: “MOIS, IRGC or their plainclothes agents raid people’s homes or offices and beat up those detained. They also confiscated the victims’ phones, computers, and many of their personal belongings and valuable items.”