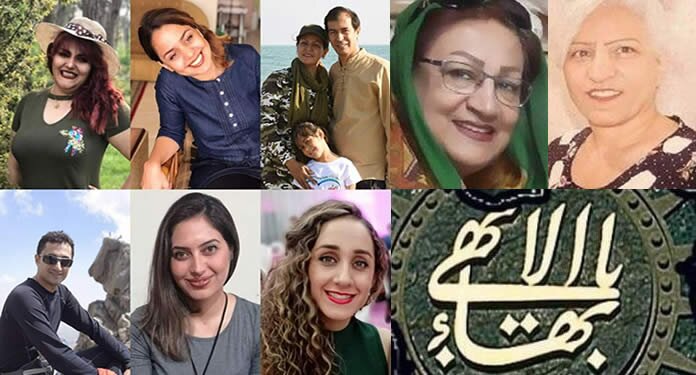 Iranian courts in the past weeks sentenced followers of the Baha’i faith to lengthy prison terms.
A Revolutionary Court in Shiraz has sentenced seven followers of the Baha’i faith to a total of 33 years in prison.
According to the verdict which has been issued by the Branch One of the Revolutionary Court in Shiraz on May 10, Shahriar Atrian, Navid Bazmandegan, Bahareh Qaderi (Ghaderi), Noura Pourmoradian and Soudabeh Haqiqat (Haghighat) to six years in prison each, Niloufar Hakimi to eight years and Ehsanollah Mahboub-Rahvafa to one year on charges of “propaganda against the regime and membership in anti-regime groups”.
Niloufar Hakimi had previously been sentenced to five years in prison by a criminal court in Shiraz.
Elaheh Samizadeh and Soodabeh Haghighat, who live in Shiraz, were sentenced to six years each. They are also awaiting a trial on separate charges by a criminal court.
These Baha’is were arrested in September 2018 by security forces and were released on bail until their trial.
Two Iranian Baha’i women Soheila Haghighat and Shahnaz Sabet have been sentenced to an overall 12 years of prison on charges of “spreading propaganda against the state and membership in anti-government groups”.

In a statement released on May 18 the Baha’i International Community (BIC) warned about the increased persecution of Baha’is in Iran despite the coronavirus health crisis.

“In recent days, two Baha’is in Isfahan have been arbitrarily arrested, seven Baha’is in Shiraz have been sentenced to long prison terms ranging from one to thirteen years,” the statement said adding other persecution instances of the banned religious group.The Iranian regime has been persecuting Baha’is as a matter of its policy for 41 years.
The regime considers its Baha’is to be heretics who have no religion. Iranian authorities routinely arrest members of Iran’s estimated 300,000-strong Baha’i minority community for expressing or practicing their beliefs.
Although Article 23 of mullahs’ Constitution states that “no one may be molested or taken to task simply for holding a certain belief,” followers of the faith are denied many fundamental rights, including access to education, employment, and political office.
The clerical regime has repeatedly charged detained Baha’is with national security-related offenses without disclosing evidence.