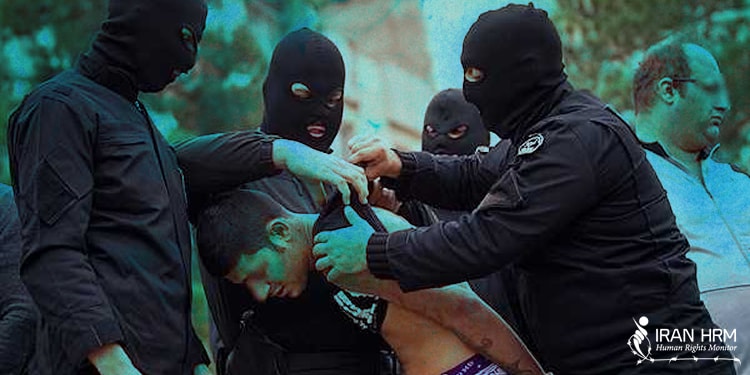 Iranian authorities took new steps to suppress dissent in various cities ahead of the first anniversary of the nationwide 2019 protests that ended in a deadly state crackdown.

The Iranian regime deployed more security forces in various cities under the pretext of preventing the spread and increase of the Coronavirus casualties, in order to suppresses dissent ahead of November 2019 protests anniversary.

Earlier the commander of the Islamic Revolution Guards Corps (IRGC) of Greater Tehran, Mohammad Reza Yazdi, announced the formation of a special coronavirus-related unit called “Enjoining the Good and Forbidding the Evil.”

This is while, the spread of the virus has become a disaster due to the inaction of the government.

Human rights organizations and activists have previously warned about ramping up repression by the regime under the pretext of restricting the pandemic.

The security forces also put pressure on the families of fallen protesters of November 2019 to silence them and on several occasions prevented them from holding anniversary ceremonies at their loved ones’ graves.

In a statement on November 17, the National Council of Resistance of Iran (NCRI) announced that the authorities arrested a large number of former political prisoners and families of members of the People’s Mojahedin Organization of Iran (PMOI/MEK). They summoned others and warned them against any activities on the anniversary of the uprising.

These steps are signs of the regime’s preparation to suppress any dissent in society.

Iran Human Rights Monitor urges the United Nations Secretary General, the Human Rights Council, the High Commissioner for Human Rights, the UN Special Rapporteurs, and all human rights organizations to take urgent action to secure the release of political prisoners at least until the end of the Coronavirus pandemic in order to avert a humanitarian catastrophe. It also calls for the formation of an international fact-finding commission to visit Iran’s prisons and meet with prisoners, especially political prisoners.

At least eight people were executed in Iran’s prisons in November. One of the victims, Fakhreddin Dastiyar, was executed on drug charges at dawn on Sunday, November 8, in Taybad in Razavi Khorasan Province, northeast Iran.

An Iranian-Swedish specialist in emergency medicine, Ahmadreza Djalali, was transferred to solitary confinement in Evin prison on November 24, where he will await the implementation of his death sentence.

The news of his imminent execution was initially reported by his wife Vida Mehran Nia, who lives in Sweden.

Two Kurd border porters “kolbars” were killed by Iranian border forces on November 18, in West Azerbaijan Province, northwestern Iran. They were identified as Vasim Fardinzadeh from Oshnavieh, and Hakan Mohammadzadeh who was married and had two children and lived in Salmas. The two border porters were targeted without warning.

Kamal Alam Holavi, a Kurdish man was killed on November 6, when security forces opened fire on a group of porters, directly targeting them from close range without prior warning.

Security forces on November 5, opened fire on a group of border porters killing one man identified as 38-year-old father of 3, Hassan Dallayi Milan.

A kolbar identified as Siavash Kore Sony was shot and killed by state forces in the border areas of West Azerbaijan province.  The state forces targeted him on suspicion of carrying smuggled goods without prior notice.

Iranian police forces killed a Kurd man in Hawraman village, western Iran, in what they said was an “accidental” shooting on November 17. The police started shooting without reason at locals in Avroman Village, also known as Hawraman in Kurdish, killing Saadi Rostamzadeh, a local shop owner.

Iranian police shot and killed a young Kurd man in western Iran. The 29-year-old father identified as Khosrow Sharifi passed away from the severity of his wounds in the hospital November 8. Sharifi was shot in the head by the police in Baneh and was taken to the hospital. A person close to the Sharifi family said that Khosrow Sharifi who used his car as a taxi was driving his passengers on October 28 near the Kileh border region in western Iran when the police stopped his car and started shooting.

Violation of the right to freedom of expression and peaceful assembly:

Seventy-one Iranian men and women were summoned to the Public and Revolutionary Prosecution Court for “investigations” into their participation in July protests in a restive southwestern city. The men and women were charged with “insulting the leader, disrupting public order and the country’s security, and assembly and collusion against national and foreign security”.

Though the July protests were completely peaceful in nature, the regime does not tolerate anti-regime slogans such as “mullahs get lost” and “we don’t want a clerical rule”.

The Behbahan Criminal Court recently sentenced 36 protesters to a total of 109 years in prison and 2,590 lashes following another similar case.

Torture and other ill-treatment remained common during November. There were at least two cases of deaths under torture in Iran’s prisons. At the same time, at least five flogging sentences were carried out. The Iranian regime is one of the few states that still uses degrading punishments, even though all international civil and political rights conventions have prohibited the use of inhumane punishments such as execution and flogging.

A 19-year-old prisoner in Gorgan’s Amir Abad prison in northeastern Iran was tortured to death on November 18. The young man was identified as Mohammad Davaji, from Oudek Davaji village, detained for getting into a fight. An eyewitness said the guards tortured 19-year-old Mohammad in front of other prisoners to “teach them a lesson”.  “Mohammad Davaji was not able to tolerate further torture and lost his life near dawn,” the eyewitness said.

On November 10, 27-year-old Farhad Vosuqi was also tortured to death in Khorramabad Central Prison, western Iran. Farhad was married and father to a three-month-old boy. Farhad’s brother confirmed the report, saying he witnessed the torture marks on his brother’s body in forensics. Farhad lived in the city of Nourabad in Lorestan Province.

A worker was lashed 74 times without prior notice or a confirmed judicial sentence in Tehran’s Evin Prison. The worker identified as Davoud Rafie, was laid off from the Pars Khodro automobile manufacturing company in 2012 for taking part in labor protests. When Davoud Rafie went to the court in Evin Prison to pursue his case, he was detained by agents and lashed him 74 times.

In yet another case, an Iranian man was flogged in Naqadeh, northwestern Iran, in late November for “insulting” a judge. The man identified as Mehdi Khairi was flogged 35 times in the Sentence Implementation Unit of the Mohammadyar Public Court. He was tried in absentia by the Court in July.

Iranian Christian convert, Zaman (Saheb) Fadaei, was lashed 80 times on Sunday for drinking communion wine. The sentence was carried out on Sunday, November 15, 2020, at Shahid Moghadas Court next to Evin Prison.

Two men were lashed in public on November 8 for theft in the northeastern city of Golbahar. According to the Fars state-run News Agency, the two men were accused of violently robbing two women. The two men were sentenced to 74 lashes in public in addition to prison.

At the behest of Ali Khamenei, last month Basij and the state security forces began monitoring the implementation of health protocols in various cities across Iran. It coincides with the anniversary of the November 2019 nationwide protests, in which the state forces killed at least 1,500 people and wounded and arrested thousands more.

However, videos and images posted on social media show that there is no real monitoring of the implementation of the protocols, and the gradual abolition of health protocols in recent months has increased the Coronavirus casualties.

It seems that that the state repressive forces are taking advantage of the rising death toll from the coronavirus ramp up their presence in cities.

In at least two cases, the regime arrested 35 people for attending parties or private tours.

Hundreds of people were arrested by security and police forces during major street arrests.

Among those arrested are children.

Violation of the right to freedom of religion and belief

Freedom of religion and belief was systematically violated. Members of Iran’s religious minorities were prosecuted for practicing their faith.

Article 18 of the Core International Human Rights Treaties states: “Everyone has the right to freedom of thought, conscience, and religion; this right includes freedom to change his religion or belief, and freedom, either alone or in community with others and in public or private, to manifest his religion or belief in teaching, practice, worship, and observance.”

Security forces raided the homes of 30-50 Bahai citizens in at least 4 provinces on November22 and confiscated their personal belongings. The houses searched were in Tehran, Alborz near the capital, Isfahan in central, and the northern province of Mazandaran. Some of the personal belongings of the Bahais including laptops, smartphones, personal computers, and religious books were confiscated. Some of the raids were carried out without search warrants.

A court in the northern Mazandaran Province, sentenced a Bahai citizen to 1 year of prison. Ali Ahmadi was charged with “spreading propaganda against the state.”

Four Christian converts were sentenced to a total of 35 years’ imprisonment for “acting against national security” by turning their home into a church. These prisoners of conscience are Mehdi Akbari, Mehdi Rouhparvar, Fatemeh Sharifi and Simin Soheili Nia.