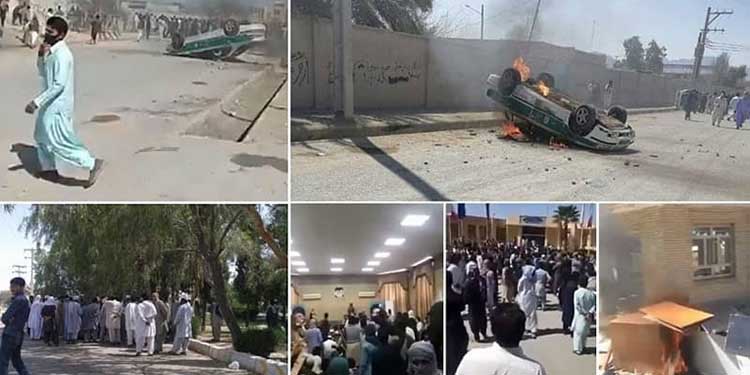 Iranian security forces fired tear gas on Tuesday to disperse demonstrators gathered in the southeastern city of Saravan, witnesses told Iran HRM, and there was a heavy presence of forces in the city.

Videos posted on social media from inside Iran showed the state security forces using tear gas and bullets to disperse angry locals who are protesting the killing of Baluch “fuel carries” by the IRGC.

Witnesses in Saravan said there had been several arrests in the city, which is in Iran’s Sistan and Baluchestan province.

Clashes ensued between locals and security forces. Security forces attacked protesters with tear gas and pellet guns on the streets of Saravan. Although several protesters were injured, there are still no reports on the exact number of people who were injured as the protests are ongoing.

Protesters also marched towards an IRGC Base and surrounded the area. The regime is bringing forces from the neighboring town of Zahedan, the capital of Sistan and Baluchestan to quash the protests.

Yesterday, several of the Baluch locals who carry fuel across the border gathered outside the IRGC base to protest the blocking of the border, demanding that it be reopened. The IRGC has dug large holes on the border to prevent Baluch fuel carriers from crossing the border. The IRGC responded with bullets.

The Baluch Activists Campaign said at least 10 the Baluch residents were killed but quoted an eyewitness as saying that “more than 50 people were killed and/or wounded”.

The following are the names of 10 fuel carriers who lost their lives in the deadly attack by the IRGC:

Locals posted the images of the residents who were killed on social media.