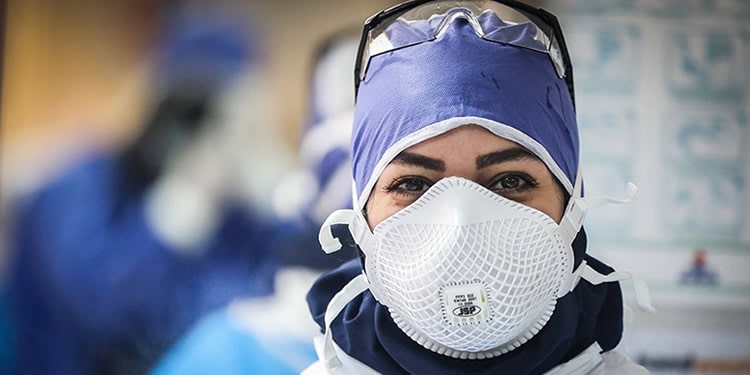 The spread of Covid-19 among nurses in Iran has become a disaster. Mohammad Sharifi Moghaddam, the General Director of the Nurse’s House, announced in April that at least 130 nurses in Iran have died of the virus so far. He said nurses were being “massacred” in hospitals due to the vaccine delay.

Mohammad Sharifi Moghaddam said that since the beginning of the coronavirus outbreak in Iran, more than 95,000 nurses have been infected with the virus and 130 nurses have lost their lives.

This is while the Head of Iran’s Nursing Organization, Mohammad Mirza Beigi, put the number of deaths at 110 on March 10, and the number of nurses infected with the virus at 90,000.

A comparison of the two statistics shows that more than 5,000 nurses have contracted the virus in the past two months, and at least 20 nurses have died in the meantime.

While confirming the increase in the number of nurses infected with the virus, Mohammad Sharifi Moghaddam said: “Unfortunately, in the past week, eight nurses in various cities died from COVID-19 and in light of the delay in the vaccination of nurses, it can be said that nurses are being massacred in hospitals.” (The state-run Khabarban website – April 13, 2021)

“Unfortunately, with 130 dead nurses who were fighting COVID-19, we are among the countries with the greatest number of infections and deaths among nurses,” he added.

Slow vaccination for nurses in Iran

On January 8, the regime’s Supreme Leader Ali Khamenei announced a ban on the import of US and UK made vaccines.

“Everyone knows that during the past 14 months, the government has put preference over the economy to the lives and health of people, although the people are always the ones who are sacrificed,” Jahan-e Sanat state-run daily wrote on April 8, 2021.

Minoo Mohraz, member of the Scientific Committee of the National Coronavirus Combat Taskforce (NCCT), acknowledged: “The COVID-19 vaccine import is slow, and as the situation continues, vaccine supply will be gradual. Russian vaccines have caused severe side effects in some people.” (the state-run Rokna news agency, March 31, 2021)

Zafarghandi, Head of the regime’s Medical Organization said: “The vaccines are delivered in packages of 100,000 and 200,000, which are not sufficient even for the first phase of vaccination of the medical staff and vulnerable people.” (The state-run Mehr news agency, April 1, 2021)

The head of the General Assembly of the Iran’s Medical Organization also said that 80% of healthcare workers in public hospitals had not been vaccinated.

“Even 80% of nurses working in public hospitals have not received the vaccine,” he added. (The state-run ILNA News Agency – April 8, 2021)

Shortages of nurses in Iran

The shortage of nurses was a serious issue in Iran even before the outbreak of COVID-19. But after the epidemic, the situation has become much worse.

Referring to the shortage of nurses in Iran, Mirzabeigi, head of the Nurses Organization, said: “The most important problem of the nursing community is the severe shortage of staff. For about 170,000 hospital beds, there are only 145,000 nurses and the ratio of nurses to beds is about 0.08, while it should be 2.5 nurses per bed. So the number of employed nurses should be 2.5 times what it is now in order to comply with the standard conditions. If the trend of increasing the number of beds and retirement of nurses continues, the shortage will increase every day and patients will suffer the most.” (The official IRNA news agency – December 17, 2020)

“Our work shifts are 12 hours, but due to the increase in calls, a number of nurses are working more shifts, even up to 24 hours,” said one of the nurses in Unit 115 of the Tehran Emergency Department, who responds to people’s calls into the system. (The state-run Mizan news agency – November 5, 2020)

With the spread of the coronavirus in the world and the increasing need for medical staff, some countries began to attract more nurses, and many tried to make up for their shortcomings by trying to attract nurses from Iran.

This is while nurses in Iran face many difficulties while making a simple living. After the epidemic, the situation has become much worse.

Nurses in Iran in the past year have protested low wages, lack of medical and hygiene supplies, over-crowded hospitals, and delay in extra pay since the onset of the Covid-19 pandemic.

But each time, not only did they not receive an answer, but in some cases, they were repressed by the regime. Private nurses have several months of unpaid wage claims.

The Association of Nursing Activists wrote in a strongly-worded statement that, “a nurse provides services to ten critically ill patients at the same time. Are the officials waiting for all the nurses to die of coronavirus before they bring in new hires?” (The state-run Salamatnews.com – November 15, 2020)

Nurses in Iran are encountered with many challenges including forced rotating shifts and overtime as well as lack of social support, facilities, funding, and protective facilities.

The abysmal condition of nurses in Iran, agrevated with the coronavirus, has caused many nurses to consider leaving the country.

On May 5, 2021, the state-run Jahan-e-Sanat Newspaper quoted Mohammad Sharifi Moghaddam, Secretary General of Nurses’ Home, as saying: “With the outbreak of the Coronavirus and the suffering nurses have endured due to the situation, between 100 and 150 nurses leave the country every month. In European countries, nurses, especially during the Coronavirus pandemic, receive high salaries and good benefits. “

Dr. Armin Zareian, Chairman of the Board of Directors of the Nursing Organization, announced on April 11, 2021, that 500 nurses per month were emigrating to North American and European countries (The state-run Daneshjoo News Agency, April 11, 2021).

The Secretary General of the Nursing House had previously said that the migration of nurses had increased by 300%.