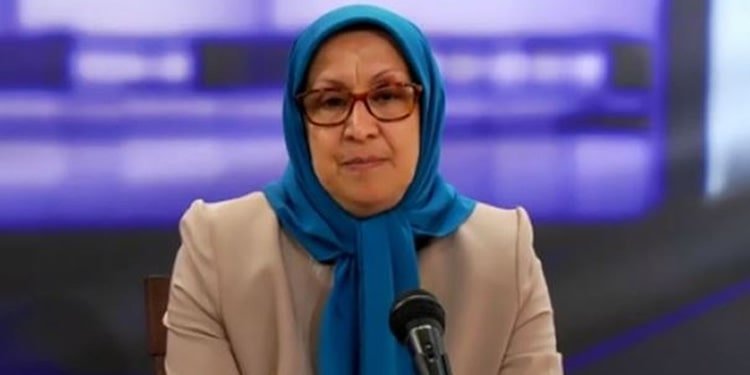 She is one of the witnesses who personally saw Ebrahim Raisi in a torture chamber.

While she was pregnant, soon to give birth, she was arrested in Hamedan and taken to prison to be tortured and beaten with an electric cable.

In an interview with Iran Human Rights Monitor, Farideh Goudarzi introduces herself as an opponent of the clerical regime in Iran, who became acquainted with the People’s Mojahedin Organization of Iran (PMOI/MEK) during the 1979 revolution.

In 1983 Goudarzi was arrested by regime authorities, taken to northwest Iran’s Hamedan Prison.

“I was arrested with my husband and brother in the summer of 1983. I was pregnant at the time of arrest and had a short time left before delivery of my baby. Despite my conditions, they took me to the torture room right after my arrest,” she said.

Farideh Goudarzi exclusively told Iran HRM, “It was a dark room with a bench in the middle and a variety of electric cables for beating prisoners. There were about seven or eight torturers. One of the people who was present during my torture was Ebrahim Raisi, then chief Prosecutor of Hamedan and one of the members of the Death Committee in the 1988 massacre.”

“He was standing there watching me as a pregnant woman to be tortured,” Farideh Goudarzi revealed.

Ebrahim Raisi was directly involved in the arrest, imprisonment, torture, and execution of political prisoners.

Regarding the position and Raisi’s role in the repression and violation of human rights in Iran, Farideh Goudarzi adds, “Raisi was the prosecutor of the Hamadan province until 1985. During that time, he was directly involved in the arrest, imprisonment, torture, and execution of political prisoners.”

During that period, prisoners who were charged with moharebeh (waging war on God) were hanged.

“I have personal knowledge about some of the victims. For example, Mahnaz Sahrakar, a 16 or 17-year-old girl, one of the supporters of the PMOI from Hamedan, was arrested and executed after being raped in prison.”

“Mohammad, another supporter of the PMOI was also arrested in Hamedan. “As soon as he was arrested, he was flogged in a torture chamber for several days until he died,” Goudarzi said.

I was a mother with a newborn baby with several hours of interrogation a day and a lot of physical and mental torture. Sometimes I had to feed my child only with water and sugar for 48 hours. He was very sick. In the silence of the solitary confinement, the only sound I could hear was the cry of my son Iman, which created stress for other prisoners, as well.”

“In one instance, at one a.m. on August 25, 1983, a number of Revolutionary Guards brutally stormed the solitary confinement cell where I was being held. My 38-day-old baby and I were asleep. The door of the cell was opened and several guards, all of them interrogators, entered the cell. One of them lifted my young child off the ground in a sleeping position and threw him from a height of 50-60 cm.

“My terrified son started crying. The same guard started taking off my baby’s clothes in front of me. As a mother who had just given birth, I just screamed but no one paid attention to me.

Ebrahim Raisi was standing next to the door of my cell, watching such heartbreaking scenes.

“The next day, from 8 a.m. to 2 p.m., my son and I were taken to court for questioning. For 6 hours in a row, I was interrogated by several interrogators in a large room.

“Throughout the interrogation, my son was hungry and crying from hunger. The guards just laughed at him.

One of the interrogators took him from me, holding him with one hand and slapped him on the back and watched my son’s crying. Raisi was also present there as a prosecutor”.

At the end of the interview, Farideh Goudarzi talked about the fate of her family members.

After 11 months of torture, imprisonment, and being lashed, Behzad Afsahi, was hanged in June 1984 from a construction crane, as Raisi reportedly oversaw his execution.

“In the very first month of his arrest, my husband became mentally ill due to excruciating pressure”. Goudarzi said.

My brother Parviz Goudarzi was executed during the massacre of political prisoners in 1988. He was arrested in 1983. During the arrest, he was shot in the right arm and leg and was seriously injured. He was tortured on the orders of Ebrahim Raisi. He was eventually sentenced to twenty years in prison by a court headed by Raisi.

After enduring six years of imprisonment, torture, and solitary confinement, he was executed in 1988 massacre in Hamadan Prison.

My sister, Fariba Goudarzi was killed by regime agents in 1988.

In 1988, Farideh Goudarzi was in solitary confinement in the IRGC prison under torture for three months, and she was unaware of what was going on outside. Later, she heard that every night the prisoners were taken for execution and all relocations were carried out quietly and under special security conditions.

After three months, when Farideh came out of the solitary confinement, she found that many of the prisoners had been executed.

My son Iman was also arrested in 2012 and taken to Evin Prison for supporting the PMOI. In 2015, he was tried by Judge Salavati and sentenced to five years in prison. Soon after, we decided to leave Iran because there was no security for us”.

Delta variant spreads in Iran with the regime’s mismanagement