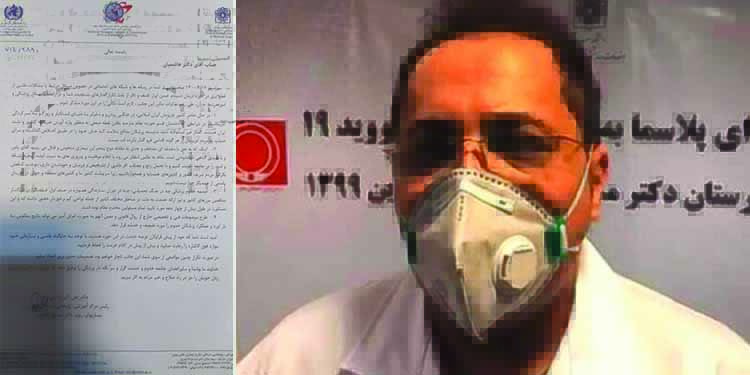 A top aide to Iran’s supreme leader threatened an ICU specialist after he criticized the regimes Health Minister power outages in hospitals.

After Dr. Mohammad Reza Hashemian criticized the regime’s Health Minister for power outages in hospitals, and demanded the minister to be tried, Ali Akbar Velayati warned him: “If you repeat such positions, I will have to take more serious decisions. “

According to the state-run Tasnim news agency, Ali Akbar Velayati, Velayati, Khamenei’s adviser, who is also the director of Masih Daneshvari Hospital, called Hashemian’s criticism as “indigested” and said: “Inducing despair and hopelessness is an unforgivable sin. “On the contrary, by announcing the successes and victories achieved, we are expected to strengthen the spirit of cheerfulness and hope in society and reduce the people’s worries by enduring the hardships of diagnosis, treatment and self-control.”

Earlier, in a video message Mohammad Reza Hashemian, strongly criticized the Minister of Health because people are going to Armenia for vaccination, saying that he should be tried for “humiliating” the Iranian people.

As a result of Iran’s vaccine mismanagement, Iranians are going to neighboring countries for vaccination or buying the banned vaccines in black markets.

Although many countries have vaccinated over 60% of their population, regime officials are making the elderly wait in long lines for hours in the hot summer for their first dose of the COVID-19 vaccine.

Mohammad Reza Hashemian also referred to the power outages in hospitals and said that between the time electricity goes out and the emergency power kicks in, hospital patients on ventilators face life-threatening conditions and have even died.

Dr. Mohammad Reza Hashemian, an ICU specialist at Tehran’s Masih Daneshvari Hospital, posted a video on his Instagram account showing patients on ventilators in critical condition during a blackout.

A voice heard in the video which shows three patients in the dark CCU rooms of an Iranian hospital says patients are “expiring” because the emergency power has not been connected.

Speaking with the state-run ROKNA news agency, Mohammad Reza Hashemian said, ” This time a video was published but we have faced these kinds of scenes many times in the past. When oxygen is cut off, some ventilators stop working correctly. Some ventilators which work with turbines become completely useless. This has a very bad effect on patients. When this happens, sometimes patients suffering from COVID-19 die before healthcare workers can fix the oxygen. We have said this many times but unfortunately, the Ministry of Health refuses to publish the details surrounding the deaths of COVID-19 patients.”

He also said the Health Ministry had bought ventilators without coordinating or checking with relevant experts.

“A ventilator is not like a TV which works without any problems after being connected to an emergency power source. The quality of the ventilator drops and oxygen pressure decreases leading to the death of patients,” he said.

“This is part of the classified secrets of the Health Ministry which will not be announced under any circumstances,” Dr. Hashemian added.

Tehran’s blackouts have angered Iranians living in the capital and other cities. Locals say the blackouts are unorganized and unannounced. Another problem in hospitals is that air conditioners are not connected to emergency sources, posing serious threats to critical patients in the hot summer.

In the past days, Iranians protested in several cities against the lengthy and unannounced blackouts. In some cities they chanted “Down with Khamenei” from their homes, blaming the regime and its Supreme Leader.

Iranian officials said the blackouts will continue for at least a month.