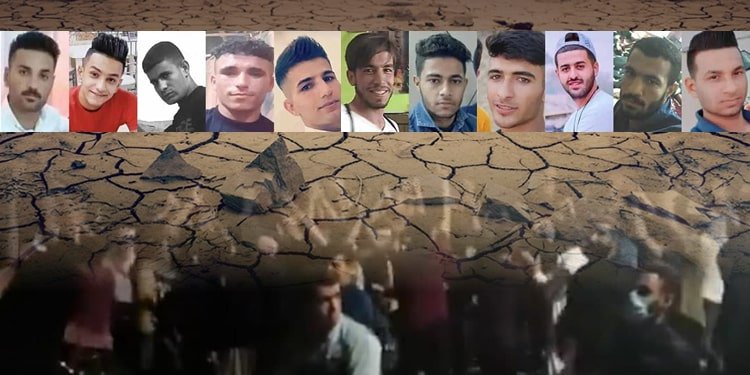 Khamenei issued an edict appointing Ejeii as head of the Judiciary, which is the apparatus in charge of executions and crimes in Iran. In his decree, Khamenei noted Ejeii’s “priceless experience and brilliant record” which is a reference to his long-time expertise in human rights abuses and suppression during his service as the first deputy to the Judiciary Chief, the country’s General Prosecutor, and the Minister of Intelligence.

In his “new combative and repressive configuration” after the presidential election, Khamenei has handed over the Executive Branch to Ebrahim Raisi who has a long and horrific record in the execution of thousands of political opponents. The mullahs’ supreme leader has also appointed two of his experienced security and intelligence figures to head the Judiciary and Legislative branches. Both are experts in clamping down on dissent and the arrest, detention, and elimination of opponents.

The new configuration bespeaks of Khamenei’s preparation to quell the protests and impose ever more restrictions on civil and political activists to suffocate all voices of dissent in Iran.

July saw the escalation of the Iranian people’s protests in Khuzestan Province. The protests initially sparked by severe water shortages, quickly spread from Khuzestan to Lorestan and Azerbaijan, and to Tehran, Karaj, and Kermanshah.

In the meantime, many civil activists, artists, and associations issued statements or held gatherings, in which they declared their support for Khuzestan protests.

As always, the clerical regime responded by brute force. Security forces shot and killed at least 12 protesters, and arrested hundreds of others.

Internet blockage observatory NetBlocks said it could “corroborate widespread user reports of cellular network disruptions” since July 15 and amidst the widespread protests against water shortages in Khuzestan, which continued on the following days.

As in the past, Judiciary officials and the state-run media put the blame on the “enemies and aliens,” dubbing the protesters as “rioters.” In this way, they tried to legitimize and underline the need to clampdown on protesters.

In addition to the protests, last month saw continued executions and handing down of flogging sentences, indiscriminate and murder of porters, and the outbreak of the Covid19 in various prisons due to the authorities’ negligence.

In this monthly bulletin, Iran Human Rights Monitor has tried to shed light on a small part of the violations of human rights in Iran.

On the orders of the prosecutor, prison authorities have deprived the two prisoners of conscience of making phone calls. They are not allowed to have any contact with their families or outside world. The denial of the right to call coupled with the approval of their death sentences have raised concerns about the fates of these prisoners of conscience.

Prison conditions and the pandemic

Despite the spread of the coronavirus contagion in prisons over the past month, the clerical regime’s prison authorities continued to deprive prisoners of the necessary health care and equipment.

According to informed sources, 80% of the prisoners in Khalkhal Prison were infected with the Covid-19 but denied treatment.

The same was true for the women’s ward of Evin Prison.

According to a report published last month by Alieh Motallebzadeh, the political prisoners detained in the women’s ward of Evin contracted the virus. The prison authorities, however, abandoned them in the quarantine under unsanitary conditions without providing them the essential services and care.

At least nine female prisoners were sent on leave in July due to the Coronavirus infection. They included the retired lawyer and political prisoner, Giti Pourfazel.

The conditions of Iranian prisons continued to deteriorate in July.

Reports from the Prison of Jiroft, in the southern Kerman province, said there were frequent power outages. Masked guards in this prison attacked prisoners to discover and confiscate their mobile phones; a measure intended to prevent leakage of news.

A major clash broke out in the Central Prison of Urmia that led to one death and injuries of 16 prisoners. The reason was the prison officials’ disproportionate distribution of food rations. This led to protests and riots among the prisoners, resulting in casualties.

• On July 27, 2021, Hamed Ashouri, a Christian convert, was transferred to the Central Prison of Karaj to serve his 10-month sentence. Agents of the intelligence services arrested Mr. Ashouri in Fardis, Karaj, on February 23, 2019, as he was leaving home. They detained him in Rajaii-Shahr Prison for ten days, then transferred him to Ghezel Hesar Prison, where he was held for two days. Security officers interrogated the Christian citizen and searched his home while he was in custody.

The Iranian regime’s military and armed forces, including the IRGC and the security and border guards killed at least 11 civilians in July.  At least 18 civilians were injured and wounded as a result of indiscriminate shootings by security and military forces last month.