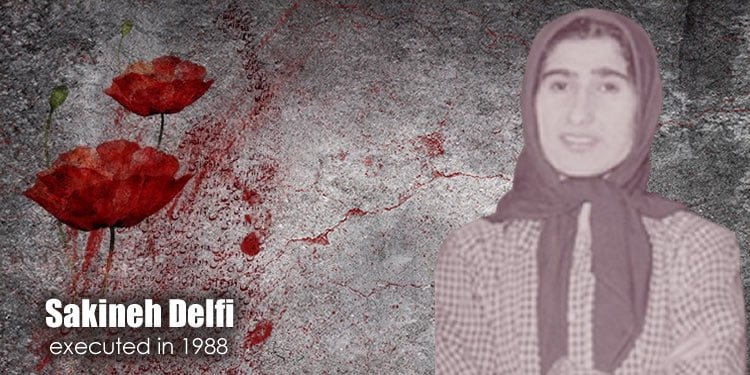 Sakineh Delfi was born in 1962 in Abadan, southern Iran.

Sakineh Delfi was only 16 became interested in politics. She acquainted with the People’s Mojahedin Organization of Iran (PMOI/MEK) and participated in their meetings.

She engaged in activities, including selling the Mojahed magazine and participating in Mojahedin gatherings and rallies.

Sakineh Delfi was arrested multiple times, imprisoned, and beaten by Iran’s Islamic Revolutionary Guard Corps (IRGC) during 1979-1981 because of her activities.

She was last arrested and imprisoned in 1987. She was taken to multiple prisons and was severely tortured in each. She was subjected to a variety of tortures including being whipped and burned by an iron.

Some of her fingernails were pulled; she was hanged by her hair; a metal rod was pierced into her body while being whipped; they pierced her knees with drill, and threw her into ice water, but she would not be broken or reveal any secret information.

Because of enduring so much torture under severe conditions, Sakineh lost so much weight and reached 34 kg (75 lbs).

She was tortured to reveal the whereabouts of her friends, but she refused to do so.

During a prison visit with her sister and mother, her mother asked why she lost so much weight. While pointing to the IRGC members, Sakineh said, “They did this to me and the other political prisoners.” She was beaten in front of her crying mother and sister and was taken away.

In summer 1988, two mullahs by the names of Jazayeri and Abdollahi went to one of the wards of Ahvaz Prison where Sakineh was being held, addressing the inmates, “You must make up your mind. Khomeini is on one side and Massoud Rajavi (the Leader of the Iranian Resistance) is on the other. Which side are you on?”

From the end of the hall, Sakineh, then 24, cried out, “Long live Massoud…”

Upon hearing her cry, the Revolutionary Guards attacked her and badly brutalized her. The next morning, 349 of the 350 inmates in this ward were hanged.

Sakineh Delfi was one of the first victims of the 1988 massacre of political prisoners. She was buried together with seven other PMOI political prisoners behind the Ahvaz steel industry open lands and their mass graves were covered with a 30-centimeter-deep cement to prevent access to their severely tortured and mutilated bodies.