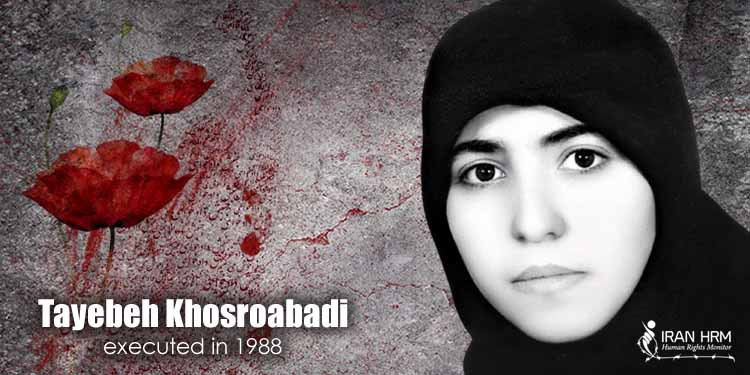 Tayebeh Khosroabadi was arrested in early 1982 for supporting the People’s Mojahedin Organization of Iran (PMOI/MEK).

She was imprisoned for her political opinions and peaceful activities, such as distributing leaflets and attending demonstrations.

She was paralyzed and was not able to move her legs since she was born.

Tayebeh Khosroabadi was executed in the summer of 1988 while she had already completed her prison sentence.

Most of the victims of the 1988 massacre were serving prison terms issued years earlier. Some had already completed their sentences and were due to be released.

One of Tayebe’s cellmates describes her memory of the day of Tayebeh’s execution as follows: “When they called out Taybeh Khosrowabadi and two other prisoners who were suffering from psychological problems in prison due to torture, we did not think they would be executed because Taybeh Khosrowabadi was born with a disability  and her prison sentence had ended. We were 100% sure they would not be executed because of their physical condition. So, we were trying to find the cell they were transferred to. We did not think at all that they were executed.”

Police publicly degraded ‘robbers’ by parading them in western Iran