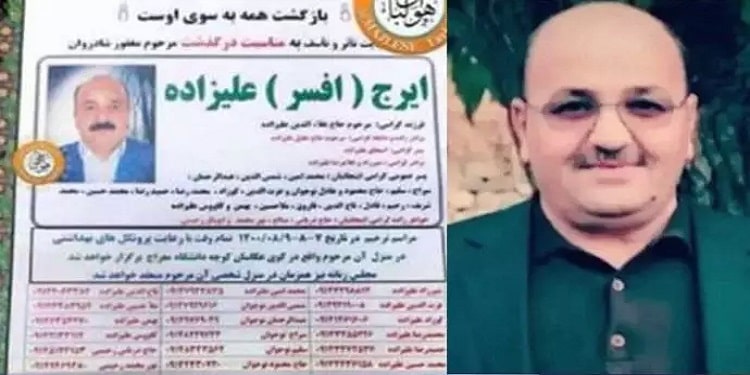 Iraq Alizadeh was tied to the bed despite dire health; his cuffs were not removed until several hours after his death

Iraj Alizadeh died in a hospital in Urmia, the capital of West Azerbaijan Province, on October 27 following several days of coma after undergoing an eye surgery which removed his eye.

Iraj Alizadeh, 50, had been imprisoned in Khoy Prison since April 2021 on common charges without standing trial.

Prison authorities sent him from Khoy Prison to a medical center in the city in early October, after he showed symptoms of Covid-19. His health deteriorated after two days. Being suspected of contracting the Black Fungus disease, he was moved to the Khomeini Hospital in Urmia.

Physicians in the Urmia hospital said Mr. Alizadeh had received the wrong injections in the medical center of Khoy.

More recently, physicians at Khomeini Hospital removed his eye because of being infected by Black Fungus. He went into coma for several days and finally died on October 27. Sources say that despite dire health, Iraj Alizadeh had cuffs on his hands and feet all the time. Several prison agents were constantly present in his room, and he was tied to the hospital bed. The agents did not remove his cuffs until several hours after his death.

An inmate dies after being brutalized by prison guards in Sanandaj