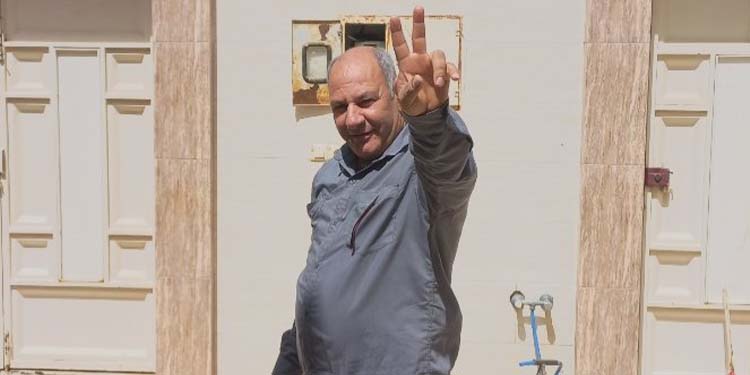 Amin Ansarifar, the father of slain protester Farzad Ansarifar turned himself in to begin serving his sentence in Behbahan Prison.

Ansarifar’s eldest son, 27-year-old Farzad, was shot and killed in November 2019 by a bullet fired by the state security forces in Behbahan, southern Iran, during the protests over the sudden rise in gasoline prices.

Ansarifar’s daughter, Farzaneh, tweeted the news, saying that her father’s crime was asking: “Who is my son’s killer?”

Amin Ansarifar, a veteran of Iran’s 1980-88 war with Iraq, was arrested along with his other son, Arman, on February 19, 2021, on charges of “spreading propaganda” against the regime.

Prior to his arrest, Ansarifar testified online at the Iran Atrocities (Aban) Tribunal in London that heard evidence from him and other witnesses about the crackdown on 2019 protests over the sudden rise in gasoline prices.

Ansarifar’s family members have been harassed by intelligence and security agents for seeking justice for the unjust killing of Farzad and other protesters.

Farzaneh, is another member of the family who has been harassed and prosecuted for seeking justice. In July 2020, she was arrested and held for eight days for participating in a gathering condemning the harsh punishments meted out against people accused of protesting Iran’s dire economic conditions.

During this time, her car was set on fire. Yet she continued to seek justice for her brother and was ultimately charged with “propaganda against the state,” “inciting the general public” and “giving interviews to foreign media” in November 2021.

In February 2022, she was sentenced to 4.5 years in prison by Branch 1 of the Revolutionary Court in Bandar Mahshahr, southern Iran, on the charges of “assembly and collusion against national security” and “propaganda against the state” for her participation in anti-state protests in November 2019.

Rights lawyer returned to prison to ‘continue serving his sentence’