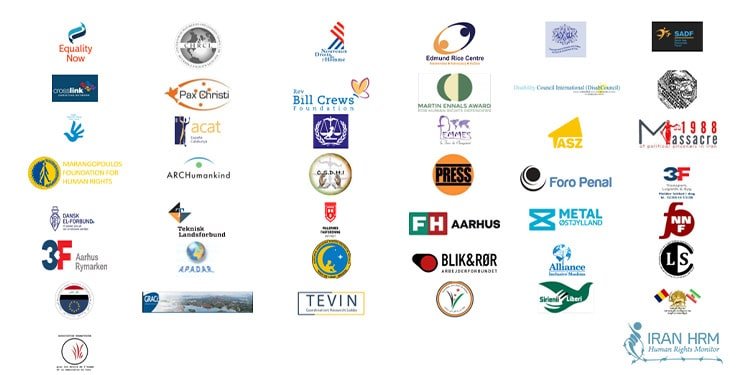 Declaration of NGOs in solidarity with Iranian protesters

Following the brutal murder of a 22-year-old woman from Kurdistan province, Mahsa Amini massive protests sparked all over Iran and have continued to date spreading to all provinces of Iran.

Repressive forces have responded violently attacking protesters with tear gas, firing shotguns, and brutally beating them. The death toll has raised to over 400 and over 25,000 have been arrested. This is while leaked documents reveal a top order to brutally kill the protesters and the internet is shut down.

Iran HRM urges non-governmental organizations, associations, and foundations to join us in supporting the following declaration in solidarity with Iranian protesters, calling on international institutions and member states of the United Nations to strongly condemn these crimes, hold the authorities responsible for the killings accountable, predicate diplomatic relationships on the release of all arrested protesters, and finally refer Iran’s crimes against humanity to the United Nations Security Council.

Declaration in Support of Human Rights and Protests in Iran

Mahsa Amini, a 22-year-old woman from Saqqez, Kurdistan province, was arrested on Tuesday, September 13th in Tehran by the “Guidance Patrol”, under the pretext of “mal-veiling” and was subsequently beaten in custody, which led to her brain injury and death.

Following the brutal murder of Mahsa Amini, massive protests sparked all over Iran and are ongoing to date. Subsequently, the extent of people’s protests, especially by women and the youth, escalated to more than 190 cities in 31 provinces of Iran. Protests also took place in 100 important universities in Tehran and other cities. The repressive forces had fired tear gas at the demonstrators and attacked with gunshots. The repression of the protests has resulted in at least 400 protesters killed, and hundreds injured. It has been reported that thousands of people have been arrested.

Also, in a large part of Iran, people faced Internet disruptions and interruptions. This repressive action of the regime is to prevent the sending of news and the publication of pictures on social media and to censor and cover up the dimensions of the massacres.

Amnesty International has repeatedly called for the investigation and prosecution of Ebrahim Raisi, the regime’s current president, for his role in the massacre of political prisoners in 1988. This massacre was carried out following a fatwa to kill all political prisoners who were firm supporters strongly committed to the Mojahedin Organization of Iran within a few months. In its 2018 book, Amnesty International called this massacre “an ongoing crime against humanity”. In the November 2019 uprising of the Iranian people, more than 1500 demonstrators were killed by the regime. All the Iranian people should have the right to free access to communications and the Internet to defend their basic rights.

We, the undersigned, call on the international institutions and member states of the United Nations to:

List of NGOs, human rights and legal experts who signed the statement: