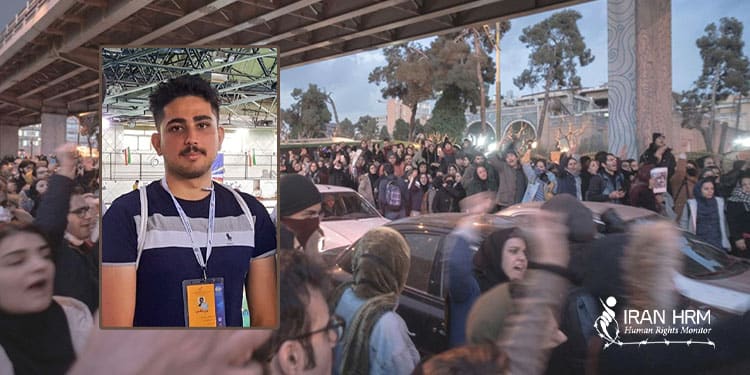 Over 1,500 indictments for detained protesters

Parham Parvari, a detained protester in Evin Prison, made a brief call to his family on Sunday, November 13, 2022, and informed them that he had been charged with moharebeh (waging war on God).

Parham Parvari, a 25-year-old swimming champion and coach from Saqqez, was charged with moharebeh at the Prosecutor’s Office of Evin Prison on November 9, 2022. Parham Parvari also worked as an engineer at a company in Tehran.

His father, Mr. Mazhar Parvari, explains that Parham was violently arrested and beaten by state agents on Monday, October 3, 2022, as he returned home from work in the midst of popular protests in Tehran.

Parham Parvari was deprived of his rights as a prisoner, including access to a lawyer and contact with his family. He was only able to inform his family of his charges in a brief phone call. He is currently detained in Ward 209 of Evin Prison. Such a charge, Moharebeh, can lead to heavy sentences including execution.

The Chief Justice of Alborz Province announced that 10 men and a woman who participated in recent protests in Alborz Province had been indicted. The charges against them were “corruption on earth” and “severe disruption of public order.”

The 11 detained protesters were arrested in Kamalshahr, Karaj, on November 3, 2022. They face charges of “corruption on earth” for the murder of a Basij member named Ruhollah Ajamian.

Over 1,500 indictments against detained protesters

The Iranian authorities have issued more than 1,500 indictments against recently detained protesters.

Iran Human Rights Monitor had previously announced on October 30, 2022, that more than 1,019 indictments had been issued for the detained protesters. After which, Masoud Setayeshi, the Judiciary spokesman in Tehran, announced 1,024 indictments issued for the detained protesters in Tehran province. He said the Judiciary will make decisions to punish the accused.

On November 12, 2022, the state-run ISNA news agency announced the indictments for 316 “cases of riots,” announced by the head of the Justice Department of Isfahan. In addition, the state-run Shahraranews.ir quoted the head of the Justice Department of Hormozgan as saying that the indictments for 164 defendants of national security crimes in the province had been issued. The charges include “assembly and collusion with the intent to act against national security,” “propaganda against the state,” and “disturbing public order.”

Other charges include “causing chaos,” “effective incitement to murder,” “defiance and assault on state security forces,” and ” destroying public and state property.”

The Public and Revolutionary Prosecutor of Qazvin has also announced the indictments for 55 detainees of nationwide protests.

According to the UN Human Rights press release dated November 11, 2022, eight people were charged on 29 October by the Islamic Revolution Court, in Tehran province, with crimes carrying the death penalty, namely “waging war against God” or “moharebeh” and “corruption on earth”.

Two days later, the Tehran prosecutor announced that some 1,000 indictments had been issued in connection with recent “riots” in Tehran province alone and that trials were scheduled in the Islamic Revolutionary Court for cases against a number of individuals. Public trials would take place “in the coming days”, the prosecutor said.