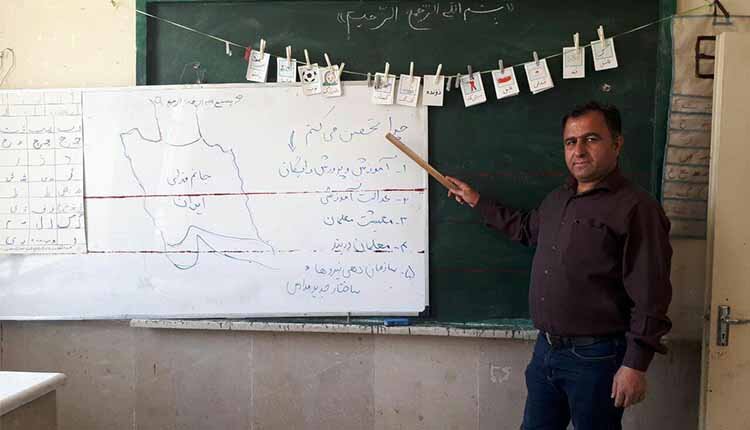 An unknown number of teachers have been summoned to Intelligence Ministry’s offices in Tehran, Qazvin, Bojnourd, Saqqez, Marivan, Kermanshah and Aligoudarz after a nationwide teachers’ strike on October 14 and 15.
Six teachers by the names of Taher Ghaderzadeh, Soleyman Abdi, Seyyed Ali Hosseini, Ahmad Ghaderi, Hamid Yazdani and Khaled Abdollahi were summoned to the Department of Public Places in Saqqez, west of Iran.

The Iranian Teachers’ Trade Association (ITTA) reported on October 14 that the head of its secretariat, Mohammad Reza Ramezanzadeh, and a teacher, Mohammad Ghanbari, were arrested after the strike was launched on October 13, 2018.

“Following yesterday’s successful sit-in, the channel belonging to the Teachers’ Trade Organizations’ Coordination Council (TTOCC) and the cloud space for the sit-in are no longer in the group’s control because of the arrest of Mohammad Reza Ramezanzadeh,” said the posting.

The post added that threatening messages against teachers had been posted on the channel since it had been hijacked.

Sources say authorities took such measures to prevent teachers from launching the strike.

On October 17, ITTA member Mohammad Saleh Shokri was arrested by Intelligence Ministry agents in Saqqez. He has not been charged and is being denied legal representation. He has also been denied visits from his family but was allowed to make a brief phone call to inform his family that he had been detained.

On October 11, Abbas Vahedian, a teacher and ITTA member, was arrested at his home in Mashhad on the eve of the sit-in strike by security agents who raided his house, confiscated his personal belongings and took him to an unknown location.

Iranian teachers, however, in 29 of Iran’s 31 provinces launched a nationwide strike on October 14 and 15, protesting poor living conditions, inflation, high prices, dwindling purchasing power of teachers, privatization of education and receiving tuition from students, as well as fraud and embezzlement in the Teachers’ Reserve Fund.

Teachers’ salaries are about one-third of the poverty line. The majority of teachers who work on temporary contracts receive even lower wages which are one-fourth of the poverty line, presently standing at 5 million toumans. Nevertheless, such low wages are paid with months of delay.

Among other things, teachers demanded pay raise proportionate to the poverty line, insurance, elimination of discrimination in the educational system, standardization of school, and securing their safety.

One of the most serious demands of the teachers is the release of imprisoned teacher activists, and recognition of independent teachers’ unions.

The two-day strike was called by the Coordinating Council of Teachers Union (CCTU), and was promoted on Twitter with the hashtag “#nationwide teachers’ sit-in.”

In support of the protesting teachers, students of Tehran University’s School of Social Sciences held a protest rally on October 15 and refused to show up for some of their afternoon classes.
They were holding signs expressing their support for their teachers’ nationwide strike and called on authorities to meet the teachers’ demands of better living conditions and the release of imprisoned teachers.

A number of telephone and communications workers issued a statement expressing their support of the protesting teachers’ strike.

“The teachers’ demands are very similar to those raised by the drivers and other hardworking people across the country. They are protesting high prices, inflation, the unprecedented drop in the people’s purchasing power, oppressive measures against teachers’ independent organizations and the imprisonment of their colleagues. We hail the protesting teachers and voice our support for their demands. We stand shoulder to shoulder with them in their effort to establish a free and equal society.”

“Teachers are among Iran’s workers’ class. They are calling for the release of their jailed colleagues, protesting inflation, poverty and extremely poor living conditions, demanding a decent life, fair wages… We, the members of the Haft Tappeh Sugar Cane Workers Syndicate, stand alongside these brave teachers and have no doubt that victory is ours.”