Eight conservationists sentenced to a total of 58 years in prison 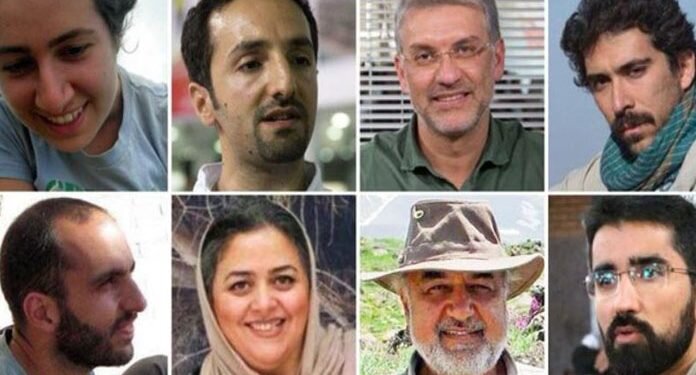 Gholam Hossein Esmaili, spokesman for the Iranian Judiciary, announced on Tuesday, February 18, 2020 that eight conservationists have been sentenced to a total of 58 years in jail for collaborating with the hostile U.S. government. They have also been ordered to pay the money “they received from the U.S. government.”

The judiciary official said Morad Tahbaz and Niloufar Bayani were each sentenced to 10 years’ imprisonment on the charge of collaboration and complicity with the hostile US government.

Hooman Jowkar and Taher Qadirian were each sentenced to 8 years in prison on the charge of complicity with a hostile government. Sam Rajabi and Hamideh (Sepideh) Kashani were sentenced on the same charge to six years in prison.

The sentences were upheld by the Revision court despite earlier rejection of espionage charges by government officials including the director of the Environmental Protection Organization and the Minister of Intelligence.

All eight conservationists were members of the Persian Wildlife Heritage Foundation (PWHF) presided by Professor Kavous Seyed Emami. They were arrested in February 2018. They have been detained under torture and mistreatment for more than two years.

Prof. Seyed Emami, 65, lost his life in suspicious circumstances in prison after two days. The Judiciary, however, said his death was a suicide. His family and friends repudiate this claim.

The autopsy result has never been made public but an initial Coroner’s Office examination indicated evidence of injection in his skin and bruises all over his body.