Families of Sheiban Prison Inmates demand to have information about the fate of their loved ones. 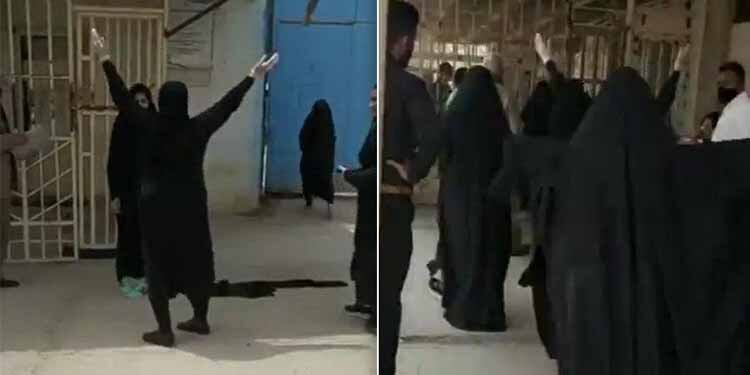 Distressed families of Sheiban Prison inmates gathered Saturday outside the prison gates to demand news on the fate of their loved ones.

A video shared on social media shows the mother of poltical prisoners Jaber and MokhtarAlboshokeh, sobbing and bewailing among the protesters.

Jaber and Mokhtar Albushoke are among prisoners who have been taken to an unknown location after prisoners rioted late March protesting the authorities’ failure to address concerns related to the spread of #COVID19 in the prison. #coronavirus https://t.co/mkREr4DJwj pic.twitter.com/qGWcbxHJea

This comes after prisoners rioted late March protesting the authorities’ failure to address concerns related to the spread of COVID-19 in the prison.

Dozens of prisoners were blindfolded and transferred to an unknown location following the protests. The authorities refused to reveal the fate and whereabouts of the prisoners to their families for two weeks.

The majority were returned to section 5 of Sheiban prison by April 13 after being interrogated and tortured in a ministry of intelligence detention center in Ahvaz.

According to reports at least 75 prisoners currently held in section 5 of Sheiban prison face new criminal proceedings in relation to the protests.

Sheiban prison authorities have demanded prisoners to pay compensation for the properties destroyed and burnt during the prison protests.

In a letter to the Iranian Judiciary Chief Ebrahim Raisi on April 30, Amnesty International wrote, “Scores of Ahwazi Arab prisoners in section 5 of Sheiban prison in Ahvaz, Khuzestan province, require medical care for injuries caused by beatings and metal pellets fired by security forces during the violent repression of protests that erupted in the prison on 31 March 2020 over the authorities’ failure to address concerns related to the spread of COVID-19 in the prison. Prisoners in need of medical care include minority rights activist Mohammad Ali Amouri, reportedly suffering from chest and head injuries; Abdolreza Obeidawi, reportedly suffering from gastrointestinal complications resulting from beatings to the stomach and loss of sight in one eye due to pellet injuries; and Abdolzahra (Zuhair) Heleichi, Abdulemam Zayeri, Sajad Deilami, Ali Ka’ab Umair, Jaber Alboshokeh and his brother Mokhtar Alboshokeh, reportedly suffering from wound infections.”

“At least seven prisoners who were returned to Sheiban prison by 13 April, after also being forcibly disappeared since 31 March, including Jaber Alboshokeh, Mokhtar Alboshokeh, Ali Mojadam, Moieen Khanafereh, Jamil Heidary, Jasem Heidary and Abdolrazagh Obeidawi, have since been crammed into a cell intended for solitary confinement, without access to regular phone calls. Relatives learnt that the seven men embarked on a hunger strike on 23 April,” Amnesty International added.