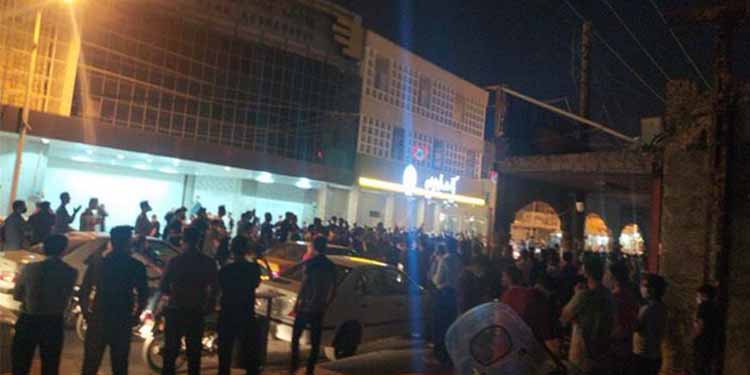 The police chief in Behbahan, on Friday vowed to deal “decisively” with further protests, a day after security forces fired teargas to disperse protests in the southwestern city of Behbahan.

The city’s police announced in an official statement on Friday that they will decisively deal with the protests.

Speaking to the official news agency IRNA on Friday 17 July, Behbahan Police Chief Mohammad Azizi said that “Vigilantly refrain from any gathering that could be a pretext for the counter-revolutionary movement,” adding they would “deal decisively” with the protests.

He said, “the protest was against the economic situation,” but insisted only “a small number of people” took part.

Azizi warned the protesters on Thursday evening and Friday morning that the crackdown on protests might be heavy-handed.

Hundreds of people took to the streets in Behbahan last night following previous calls against death sentences issued for protesters and the grave state of the economy.

People also chanted for those who were killed during November 2019 protests in Behbahan. “Dashti, rest in peace”. The slogan is a reference to Mahmoud and Mehrdad Dashti Nia, two brothers who were shot on the street in November 2019 in this city.

According to the international Internet Shutdown Observatory NetBlocks, the Iranian government restricted Internet access in Khuzestan Province from around 10 PM local time to prevent news and images of the protests being shared.

According to eyewitnesses and social media users, at least 30 people were arrested on Thurseday and Friday. Farzaneh Ansarifard, the sister of Farzad Ansarifard who was killed in Behbahan during the November protests is among those arrested. The names of other protesters arrested last night and today are, Alireza Ansarifar, Meisam aKBARI, Mohammad Shariati, Peiman Rasouli, Ahmad Akhash and Majid Zamen Pisheh.

Videos also showed a very heavy police presence in other cities namely Tehran, its sister city of Karaj, Isfahan in central Iran and the northeastern city of Mashhad.

The state security forces also made arrests in other cities.

The state-run Aftab news agency reported that a number of people were arrested in Khorasan Razavi Province on Friday. The local police accused those arrested in Mashhad, of “spying, encouraging others to participate in protests, acting against national security and disrupting public order through social media.”

Elsewhere in Shiraz, the IRGC intelligence announced that it has arrested a team affiliated with the PMOI opposition group. The IRGC did not say how many were arrested but said that those arrested “had come to the Fars Province for sabotage in a part of Shiraz.”

Iranians have called for more protests in the coming days. Last night’s protests were the first of its kind after the last round of major protests in November 2019 when Iranians took to the streets across Iran to protest the tripling of gasoline prices.

The regime responded with lethal force and shot and killed at least 1,500 protesters and civilians.

Iran’s Judiciary has recently confirmed that the death sentence for three young protesters Amir Hossein Moradi, Mohammad Rajabi and Saied Tamjidi had been upheld by the Supreme Court.

In a press conference on July 14, Gholamhossein Ismaili said that the “outcome of the case might change during the legal proceedings.”

In an unprecedented online outcry against capital punishment following recent death sentences three young men who were arrested during the November 2019 protests, “Don’t Execute” hashtag has been promoted on Twitter by over nine million social media users in less than two days.