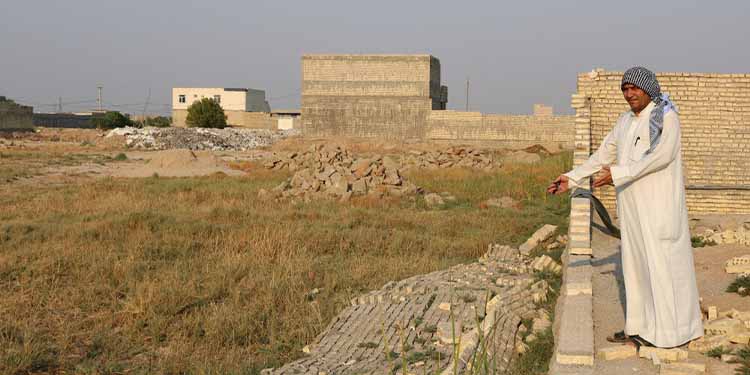 The state security forces have summoned and arrested 130 locals in Abolfazl village who had protested the destruction of their homes and confiscation of their lands on orders of Khamanei’s “charity” Mostazafan Foundation.

Some of these people who have currently been bailed out say that they were pressured in detention to sign a pledge and accept to have their homes demolished.

One of the villages, Nader Lavimi, who is an estate agent, is still in detention has been denied access to legal counsel.

According to the state-run Shargh state-run daily, locals have documents dating back to 1985 that indicate that the villagers have lived in the area for nearly 40 years.

But the Mostazafan Foundation claims ownership of the lands of the village and has now obstructed the minimum services that were provided to the villagers.

Locals in the village of Abolfazl near Ahvaz, southwest Iran, clashed with the state security forces that intended to demolish their homes on Wednesday, August 26.

Even little children were seen suffering from breathing disorders due to the security forces’ use of tear gas. Various units of the security forces even raided the Abolfazl village, injured a number of the people and arrested dozens, according to sources.

The Abolfazl village is located between the town of Zardasht and an air defense base located northwest of Ahvaz, capital of Iran’s oil-rich Khuzestan province. Long ago the village was used as farmlands and little by little various locals began building homes in this area. To this day no regime entity had ever claimed ownership of these lands.

“These villagers are the ones in need of help. The charity foundation is supposed to help those in need. They have land all over Iran. They have villas in Tehran according to videos. Why do they insist on taking this land?” The village’s Friday Prayer Imam, Seyed Yousef Mousavi told Shargh on August 26.

The Shargh report said that the residents had populated the land in Zarddasht because they were given facilities such as agricultural water during the early ‘80s and cultivated wheat, barley, and vegetables. The water was cut off after a town was constructed in Zarddasht in the ‘90s and forced locals to abandon farming. However, the residents continued to live in the village for two generations.

The village is now part of Ahvaz’s District 8 and consists of eight roads, each leading to more than 40 houses. One square meter in this area is now worth 20 million rials (equal to around $85).

During the past two years Abolfazl village locals have on numerous occasions travelled all the way to the Iranian capital Tehran to seek resolutions to this dilemma. “We have livestock and farming documents, and these lands belong to us from our ancestors. In Tehran officials promised to resolve this issue for us,” one local said.

“In Ahvaz they told us to present documents, the cost for each square meter, property information with UTM documents, and a full list of the locals. We had all these documents registered.

After some time, we hired the necessary expert and obtained a UTM documents and were able to present all the documents requested by the Ahvaz branch of the Mostazafan Foundation,” another local said.

“Unfortunately, despite their previous promises and arrangements to resolve this issue, the result was completely the opposite and those officials actually became even more intent on confiscating our lands.

A short while later they summoned 130 of the village locals. These individuals were in detention and many of them were released only after we paid bails costing a whopping 2 billion rials (around $8,500). However, even now their cases remain open in court,” he added.

“Municipality agents escorted by state security forces attack our village every now and then, demolishing numerous homes. They even attack us at nights and terrify our families. That is why people are forced to have night guards for the village,” another local said.

The Mostazafan Foundation (or the Foundation for the Oppressed) is a multi-billion financial conglomerate operating under the tutelage of Supreme Leader Ali Khamenei.

During the past four decades, the Mostazafan Foundation, or the foundation for the oppressed, confiscated homes, mansions, factories, lands and financial institutions belonging to Iranians deemed opponents of the regime or affiliated with the Shah. It was initially founded to aid impoverished Iranians but like many other organizations under the thumb of Ali Khamenei, its actual function is to “aid” regime officials.

In an August 16 interview with a state-run daily, a top Iranian official and member of the regime’s Expediency Discernment Council confirmed the foundation’s corruption.

Ahmad Tavakoli said that the assets of the biggest holding company in the Middle East have been used for officials and regime organizations instead of being used for impoverished Iranians, as was originally intended.

The state-run Hamdeli daily newspaper wrote on August 22, 2020, “The Mostazafan Foundation was established in 1979 to serve needy and underprivileged social classes and eliminate deprivation. But a look at some of the foundation’s activities gives the impression that this large foundation has become a tool to build wealth among some of society’s richest individuals. The transfer of ownership of properties and buildings of several thousand meters to influential people in the upper areas of the capital city is just one example of how the foundation has violated its primary goals.”

Most of the real estate at the disposal of the Mostazafan Foundation are being used by high-level officials. In 2019, this foundation’s net profit was 36,000 billion tomans.

Thirty years ago, following the end of the 1980s Iran-Iraq War, the real estate of Abolfazl village lacked any value and was considered inadequate for farming. Little by little as the city of Ahvaz, capital of the oil-rich Khuzestan province expanded, the real estate value of these areas began to literally skyrocket.

As a result, the regime’s Mostazafan Foundation, with a long and corrupt history of plundering ordinary people’s properties, began claiming ownership over these areas and is now ordering all the villagers to evacuate their homes. To this day any of the locals protesting this act of utter cruelty have been arrested and thrown behind bars.

As the major city of Ahvaz continues to expand, this village and other areas outside of Ahvaz have gained the attention of numerous regime entities and insiders. Many hectares belonging to ordinary people have already been confiscated by various regime institutions, including the Mostazafan Foundation.