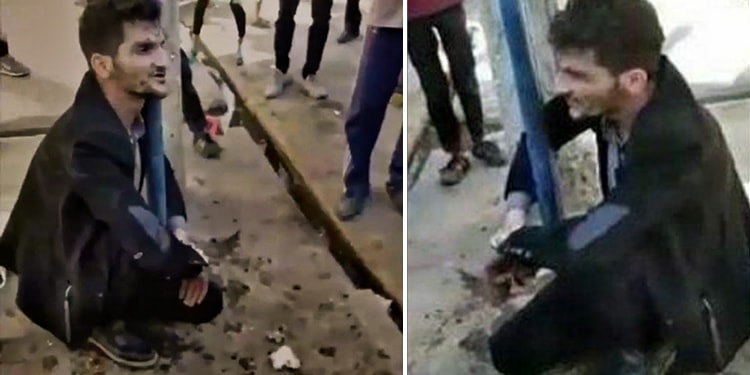 A young man suffocated to death from exposure to pepper spray after the state security forces harassed and tortured him in public.

A harrowing video shared on social media on Saturday showed a police torturing a detained man handcuffed to a pole with pepper spray and tasers in public.

The young man identified as Mehrdad Sepehri suffocated to death from abuse and pepper spray in a police car prior to reaching a hospital.

Locals said that the police was called following a family dispute. A doctor has verbally told the deceased’s family members that he died of suffocation from pepper spray.

The body of Mehrdad Sepehri was transferred to Mashhad’s Taleghani Hospital where he was registered without a name. His brother identified him in the hospital morgue. His body had numerous torture marks including on his hands, stomach, chest, neck, and head. The torture and beating marks were also evident in the video.

Shortly after the publication of the video which outraged the public, the state-run IRNA news agency reported – citing a judiciary official – that an investigation has been launched into the matter.

The death of Mehrdad Sepehri is not an isolated case.

A video clip circulated in social media on October 22, 2020, of a young woman in Abadan being mistreated by Oil Company’s security forces. The young woman with bloodied face was being held on the ground while one of the security agents put his foot on her chest.

The inhumane treatment of the injured woman in Abadan provoked widespread outrage among Iranians in Khuzestan and across the country.

Social media users said the video clip displayed an example of oppression of women and the corruption and depravity rampant within the clerical regime.

The person behind this harrowing incident was Jahan-Nejadian, a high-ranking manager of Abadan Oil Refinery and an operative of the Revolutionary Guard Corps (IRGC).

Earlier this month, a video of Iranian police officers beating alleged criminals while parading them on the back of police vehicles in public went viral, also sparking an outcry on social media.