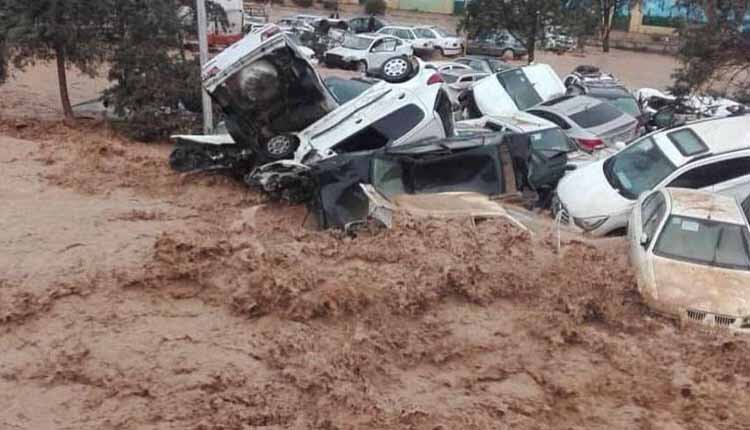 Flash floods across much of Iran have killed at least 17 people and injured 74, Iranian state TV reported on Monday.

National Emergency Service chief Pirhossein Koolivand said the casualty toll in the southern city of Shiraz was 17 dead and 74 injured, while another person was killed in Sarpol-e Zahab in the western province of Kermanshah, the service said on its website.

However, local sources in Shiraz, a major city in south-central Iran say over 120 people have been killed as a result of flash floods pouring into the city.

A Source from the city of Shiraz says many hospitals are filled with dead bodies and the regime is lying claiming 17 were killed.

Many of those killed in Shiraz were holidaymakers caught in the flood as they entered the city in their cars.

Footage from Shiraz showed massive flows of water engulfing roads and streets, cars being washed away, people struggling to walk, and traffic being disrupted.

Many people are still believed to be trapped on rooftops of flooded homes after all surrounding roads were submerged with warnings of more heavy rain to come.

In Sistan Baluchistan, several vital roads have been submerged by the floods.

According to the IRNA state-run News Agency, Arvand River in the southern city of Abadan is also flooded with water washing in on the streets.

The news agency also said that a three year old and five year old child drowned in a river in Bechareh village in Aravandkenar.

Videos on social media also show that the Dez Dam in the southwestern province of Khuzestan had also overflown.

The head of the Qazvin Crisis Management Department has warned of flash floods in 58 villages in the north western province.

There are fears the situation may get worse with Iran’s meteorological service warning that the rains will carry on into Wednesday.

Over 56,000 people have been affected in various cities and rural areas in the two provinces as a result of heavy rainfall that hit on March 19 and 20.

What is being done?

Despite state reports of government aid to the flood stricken areas, locals complain that not enough is being carried out. Ordinary citizens are helping each other in these time of crisis.

The governor of a northern province gripped by a massive flood, Manaf Hashemi was in Europe for a few weeks prior to the disaster and failed to return to Iran to coordinate the emergency, as thousands of people have been said to be stranded in inland seas created by the floods.

The absence of the governor and the inaction of the central government, has led to a big public outcry on social media.

Iran’s vice president on March 23 fired the governor of Golestan province, for being on a foreign trip and not returning to manage the disaster emergency.

Hassan Rouhani has also been vacationing on the southern Gulf island of Qeshm.

The government of Rouhani tried to vindicate the regime and lay the blame for all the problems of the northern provinces on the governor who was dismissed by Iran’s vice president for not returning to manage the disaster emergency.

Abdolreza Rahmani Fazli, Rouhani’s interior minister, said, “The governor has gone on holiday and has abandoned the province in the current situation, which is shameful. He has gone abroad to look after family issues. I had told him to only go if there was no problem.”

Some of the Iranian regime’s own media have called Rahmani Fazli’s remarks even more shameful than the behavior of Golestan’s governor and have called for his resignation.

Meanwhile, Deputy Commander of Iran’s police force said that their main priority in flood stricken areas was to uphold “security.”

The regime supreme leader Ali Khamenei, called on his armed forces to use their capacity to help out the people of the flood-stricken region. But Khamenei’s armed forces are more preoccupied with meddling in the affairs of other countries and suppressing protests inside Iran. According to reports, armed forces have been dispatched to the flooded areas, but past history shows that the regime’s security forces are more concerned from preventing protests and news of disasters from reaching other areas.

Who is to blame?

The mismanagement of natural disasters is a recurring issue in Iran. In February, floods in southern provinces left the people of the region in a similar situation.

The regime’s lack of provisions to prevent disasters and to manage them after they happen are causing great damage to the livelihoods of the people.

Last year, at least 30 people were killed by flash floods in the Iranian province of Eastern Azerbaijan.

State-run media are acknowledging that the regime has had a major role in causing the disaster, and its destructive policy in razing the forests of northern Iran have contributed to the current situation.

“The capacity of pastures in the region is just enough for just a quarter of the livestock. Authorities must tell us why they have released four times more livestock in the region than its natural resources can provision,” an expert said, adding that the reason these natural disasters recur is that non-expert persons are hired to manage the resources of the region. “400 acres of forests have been destroyed. This is a tragedy.”

Mohammad Nourizad, a former reporter from the state-run Kayhan Daily said in a video published online that one of the reasons for the severe flash floods in the northern town of Gorgan were measures by the Islamic Revolutionary Guards.

“One of the reasons behind the severe flooding of Gorgan River was a dam built by the IRGC that obstructed the water. The other reason was because the gates of Vashmgir Dam were not open and were under 10 meters of mud and had not been dredged,” the journalist said in the video.

Deforestation is carried out in full by the government with “33% of forests in Iran having been destroyed”, according to state-run media. That means that the 18 million of hectares of Iran’s forests have shrunk to just 12.4 million.

Salamat News state-run website also reported a few years ago that the main cause of floods was due to environmental damages.

“Floods are not only the result of natural disasters. It is rather the result of environmental destruction. They are the result of the changes made to natural lands, deforestation and the destruction of native vegetation. Reducing vegetation and changes in land will cause runoff from precipitation to increase by more than 30 times in some places,” the website wrote.

It’s obvious that these environmental damages are systematic and the result of government mismanagement.

Floods like other natural disasters are predictable and preventable and when it takes place, is controllable with the right infrastructure, necessary budget and technical management. But at the current rate, Iran will witness more destructive floods in the future.

Last October, Iranian state-run media reported that half of Iran’s northern forests were razed in the span of 40 years.

According to a member of the Iran Environment and Natural Resources Network Coordination Council, deforestation has destroyed half of Iran’s northern forests.

“According to the data of The Natural Resources and Forestry Organization, during the past 40 years, the area of the northern forests has gone from 3,600,000 to 1,800,000 hectares,” Massoud Molana said.

“When half of the forests are gone, the rain is no longer a blessing and turn into floods,” he added.

The environment official said that rain had decreased by 20 percent in the past 50 years while floods had increased by 50 percent.

“Rain is considered a disaster in northern Iran these days because trees have been cut down under the excuse of development, building schools, industry, roads and villas, and therefore, deforestation means flood water is directed better,” Molana added in comments carried by ISNA state-run News Agency.

“These are very large numbers and when in regard to a semi-arid country, it will lead to a huge catastrophe; We are apparently not able to understand the full scale catastrophe that our country faces, for if we did, we would not continue the spread (of deforestation) at full speed,” the website wrote.

“We are talking about the process of deforestation, which is so extensive that it can be seen,” wrote another Iranian website.

“The increase of construction on a day to day basis can be seen clearly by those who take various trips to the north of our country; the tragedy that had struck the coastal strip is now taking place at double the speed in the forest areas,” Vosaat website added.