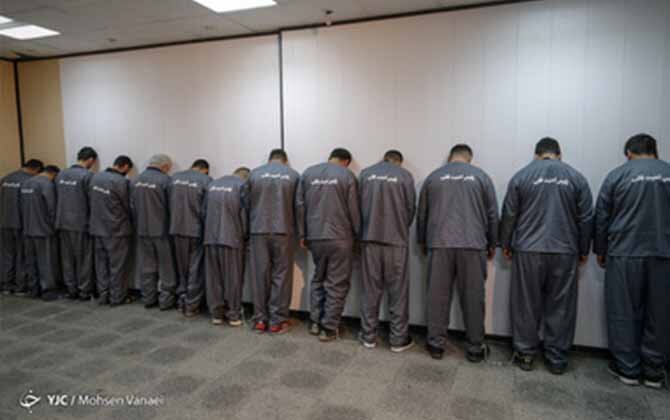 Reliable reports indicate detained Iranian protesters in several prisons across Iran are under torture to make false confessions against themselves.

Around 420 protesters, detained in Tehran and Alborz province, have been transferred to Section 8 of Raja’i Shahr Prison, controlled by the Intelligence Ministry.

Protesters were forced to take off their clothes and were then beaten for hours with cables, whips and batons.

Protesters were also soaked with water at nights before being brutally flogged and beaten.

There were other reports of Iranian protesters under torture in Adel Abad Prison of Shiraz, southern Iran.

a large number of protesters arrested in Shiraz have been temporarily transferred to Adel Abad Prison, where has reached its full capacity.

The exact number of detained protesters in Shiraz and their condition is not known.

Intelligence agents are torturing protesters. The families of the jailed protesters have not been given answers as to the condition of their loved ones.

Security forces have also transferred injured protesters from the hospital to prison and are investigating to find out the identities of protesters who were treated in the Namazi and Faqihi hospitals for future arrests.

Hundreds of protesters were arrested in Shiraz especially after November 19. The city was the scene of intense clashes and protests during the past few days.

Other reports indicate that as many as 3,000 detained protesters in Tehran have been transferred to Fashafuyeh Prison where they are under brutal torture.

At least 450 people were killed by the state security forces while 4,000 were wounded in the protests that began on November 15 and spread across at least 100 cities and towns.

Meanwhile, media reports indicate that the government has started a new wave of arrests from among students, workers and others since Wednesday.

Following mass protests, Supreme Leader Khamenei called protesters “hooligans” in a televised speech. During the next few days, the regime resorted to bruit force against protesters, opening fire on gatherings of more than 10 people in some parts of Iran.

Senior officials have warned that protesters would receive severe penalties, with several them demanding the death penalty for the “leaders”.