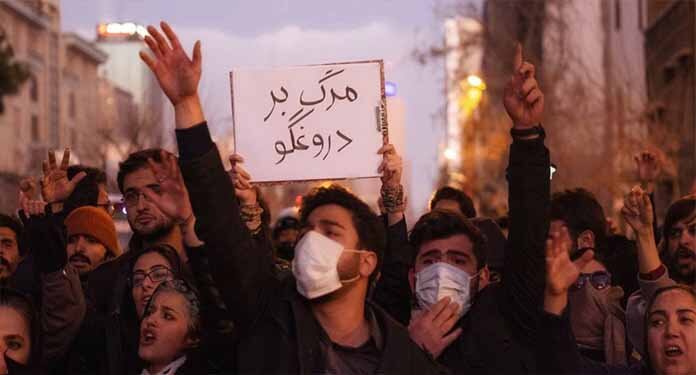 Major protests erupted across Iran with angry protesters calling officials ‘liars’ for having denied shooting down a Ukrainian passenger plane for three days.

Iranian authorities warned protesters not to stage further protests, as  major street demonstrations continue over the shootdown of a Ukrainian passenger airliner.

Ebrahim Raisi, Iran’s Chief Justice, issued a warning to protesters on Monday, saying “the agents of America and agents of foreign countries” want to use anger over Flight 752 to “compromise” Iran’s security.

The protests broke out after the Iranian military on Saturday said it unintentionally shot down a Ukrainian passenger airliner last week, killing all 176 people on board, after denying for days that it was responsible.

The heavy security presence was also reported in Tehran’s Azadi Square on Monday.

Jan 12 – Tehran, #Iran
This protester says the regime forces throw tear gas at people. The man chants against Khamenei saying: "You will have the same fate as Gaddafi!"#IranProtests pic.twitter.com/TrbPQ5Z3vB

Dozens of protesters have been arrested so far.

Mohammad Esmaili, a senior photography students at Tehran University was arrested during yesterday's #IranProtests
His condition &whereabouts are still unknown.
Thousands of people were protesting #Iran regime's denial that it shot down a Ukrainian jetliner. pic.twitter.com/AqDukGGw78

Salah Gharibi, a student of veterinary medicine at Razi University of Kermanshah, W #Iran was arrested during yesterday's #IranProtests
His condition &whereabouts are still unknown.
Thousands of people were protesting the regime's denial that it shot down a Ukrainian jetliner. pic.twitter.com/c7Go2BHBuW

Mohammad Amin Hosseini, a law student at Gorgan University, was arrested during #IranProtests2020 last night. His current status is unknown.
Thousands of #Iranian people and students were protesting over Tehran’s admission that it shot down a passenger #UkrainianPlane pic.twitter.com/561COmCojP

Earlier, the Iranian regime brutally cracked down on nationwide protests that erupted on November 16 after the regime tripled the price of gasoline. At least 1,500 protesters were killed, around 4,000 were wounded and injured and 12,000 were detained.