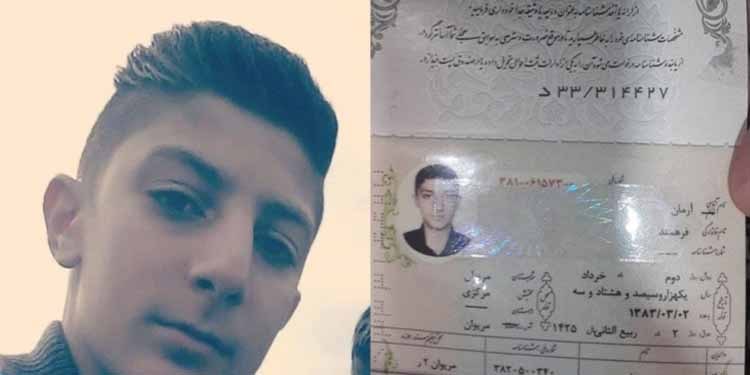 Arman Farahmand, a teenager accused of murder, went on a hunger strike and sewed his lips to protest the authorities’ failure to handle his case.

A relative of Arman Farahmand, told Kurdpa website that the 17-year-old has been on a hunger strike since Saturday, June 19, in Sanandaj Correctional Center.

Arman Farahmand who was only 16 when he committed his alleged crime was arrested along with eight individuals last year following a group fight during which a man was killed.

All of the defendants in the case have been acquitted in recent months, but Arman Farahmand remains in custody.

Iran is a state party to the Convention on the Rights of the Child, which bans executing offenders who were children at the time of their offense.

Iran’s penal code, as amended in 2013, prohibits executing child offenders for certain categories of crimes, including drug-related offenses. For other serious crimes, article 91 of the amended penal code allows judges to use their discretion and not issue a death sentence against a child who was not able to comprehend the nature and consequences of the crime at the time. The amended law also allows the courts to rely on “the opinion of a forensic doctor or other means it deems appropriate” to establish whether a defendant understood the consequences of their actions.

However, Iranian courts have continued to sentence children to death after these amendments became law.

This case is just one of the examples of the injustices in Iran and especially by its judiciary which is tied with extreme human rights violations.

Ali Arjangi, a juvenile offender sentenced to death, committed suicide on June 12, in Ardabil prison by cutting his throat and veins.

Arjangi is accused of committing “premeditated murder” four years ago when he was 17 years old. He has denied the charges.

Iran is one of the last remaining countries in the world which continued to carry out executions, even for crimes committed by minors, in violation of its obligations under the International Covenant on Civil and Political Rights and Convention on the Rights of the Child.

All these executed persons had been detained and sentenced to death for crimes allegedly committed under the age of 18. Indeed, some were kept in prison for a long time. For instance, Mohammad Hassan Rezaei was behind bars for 12 years, and authorities executed him in Lakan Prison in Rasht, the capital of the northern province of Gilan, on December 31, 2020.

Furthermore, Iranian interrogators killed several inmates, who had been arrested below 18 years of age, under torture. In April 2020, authorities tortured juvenile offender Danial Zeynolabedini to death in solitary confinement in Mahabad Prison. Two days earlier, he had called his family from the prison, saying, “Come and save me.”

It is time for international organizations to hold the Iranian government accountable for its gross and systematic violations of human rights, particularly children’s rights. The United Nations, UN Human Rights Council, UNESCO, and other rights organizations must pressure the clerical regime to respect the people’s fundamental rights of life and stop executions.