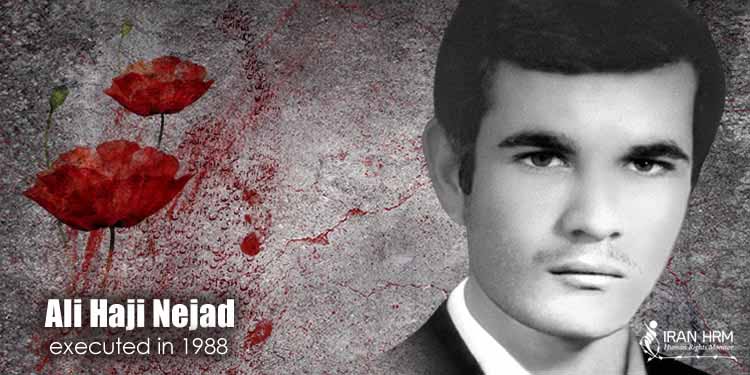 Ali Haji Nejad was born in March 1961 in one of the villages of Khoy, a city in the West Azerbaijan Province in northwest Iran. He was the seventh child in a family of farmers. Ali started working in a farm since he was a child, experiencing the hardships of life. Ali went to Tehran in 1973.

His older brother, Ahad Haji Nejad, was a university student there and became acquainted with the political groups of the time.

As an older brother, Ahad had a great influence on Ali.

Ali received his diploma in 1978 at the age of 17 and continued his studies in mathematics at the university.

He began his political activities at the university by participating in demonstrations, and after the 1979 Revolution in Iran, he continued his activities in connection with the People’s Mojahedin Organization of Iran.

“Ali was arrested in November 1981 in Tehran’s Enghelab Square by the regime’s agents. We were unaware of him for a year until we found him in Ghezel Hesar prison a year after his arrest. He had a difficult time in detention and was sentenced to 10 years in prison,” his sister said.

Ali Haji Nejad was interrogated and severely tortured in prison to provide information about his other two brothers.

He was transferred from Evin Prison to Wards 1, 7 and 8 of Ghezel Hesar Prison and then in February 1985 to Gohardasht Prison.

In November 1986, Ali’s mother visited his son in Gohardasht Prison. Ali’s mother was shocked when she saw his bruised face at the meeting.

Torture signs were evidence on his body. He became thin and weak. One of his legs was severely wounded and he could not move it. He was staring at his mother and could not speak properly. His eyes were very weak.

During the meeting, he told his mother that he had been at an IRGC detention center near Gohardasht for the past nine months.

The place was a safe house where detainees were subjected to the most severe torture.

Ali had been tortured so much during his detention that he had committed suicide several times, but the interrogators kept him alive to obtain information.

The family were not informed of his execution until December 3, 1988, when regime agents handed over some of his clothes to his mother and told the family that Ali was executed.

After some time of investigation, the family found that the exact date of his execution was October 2, 1988.