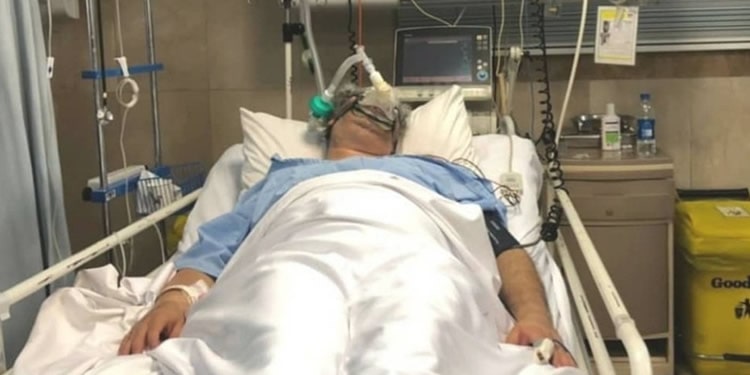 Imprisoned Iranian writer Baktash Abtin is in critical health condition after being deliberately denied timely medical treatment. He contracted the Covid-19 in prison, but prison authorities sent him to the hospital after a 10-day delay.

Iranian Writers Association (IWA) said on January 2 that doctors had to “place him in a medically induced coma” to continue his treatments for COVID-19.

The health condition of Mr. Abtin, who had been transferred from prison to hospital in recent days, deteriorated yesterday, promoting doctors to decide to place him in a medically induced coma.

“His suffering during the past month has been the direct result of actions by the state and prison authorities,” tweeted the Iranian Writers Association on January 2.

IWA emphasized that Mr. Abtin’s treatment process “began deliberately after ten days of negligence” and that “high lung involvement and severely low blood oxygen levels caused Abtin to have no symptoms in the following days, despite the efforts of the medical staff.”

Abtin is a prominent writer and freedom of speech advocate who has been imprisoned along with two fellow Iranian Writers Association board members, Reza Khandan Mahabadi and Keyvan Bajan, since September 2020.

They were sentenced in May 2019 to six years prison each on charges of “propaganda against the state” (one year) and “assembly and collusion against national security” (five years) for peaceful actions including publishing documents about the IWA’s history and statements against censorship, and organizing memorial ceremonies for IWA members who had been killed by state agents in the 1990s.

In December 2019, Branch 36 of the Appeals Court upheld the sentence against Abtin. Based on Article 134 of Iran’s Islamic Penal Code, which states that in cases where there are multiple charges, only the sentence for the most severe charge will be served, Abtin would have to serve five years in prison.