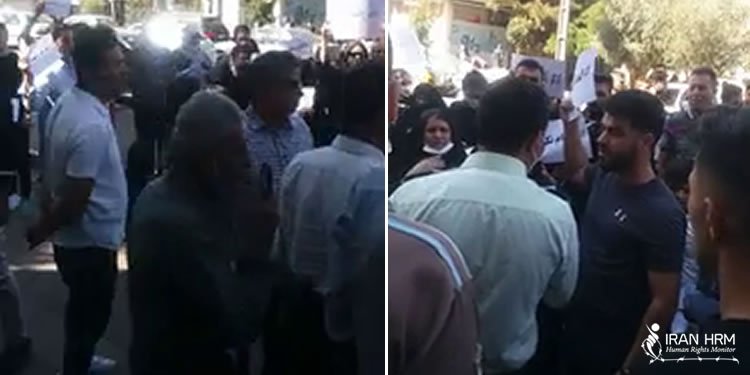 The families of death-row prisoners gathered outside the Revolutionary Court of Karaj on Tuesday, September 6, 2022. They held placards with the theme “#Stop_ executions,” demanding the authorities halt the execution of their loved ones.

The families of the death-row prisoners announced that they would continue their protest gathering outside the Revolutionary Court of Karaj the next day.

The gathering of the families of death-row prisoners comes in the wake of the Iranian Judiciary’s order to expedite carrying out the death sentences as soon as possible.

The authorities of the Central Prison of Karaj, Minab Prison, and Gohardasht Prison have transferred at least 18 prisoners to solitary confinement since Friday to prepare them for execution.

Many death-row prisoners are facing imminent execution. Their families are concerned and anxious after the order to expedite their death sentences. So, they gathered in protest to stop the executions of their loved ones and save their lives.

Iran Human Rights Monitor calls on international organizations, the United Nations, the European Union, and its member states to condemn the Iranian regime and make it stop the implementation of death sentences in Iran.

The dossier of Iran’s human rights violations should be referred to the UN Security Council. The Iranian regime leaders and officials, including Ali Khamenei and Ebrahim Raisi, should face justice.