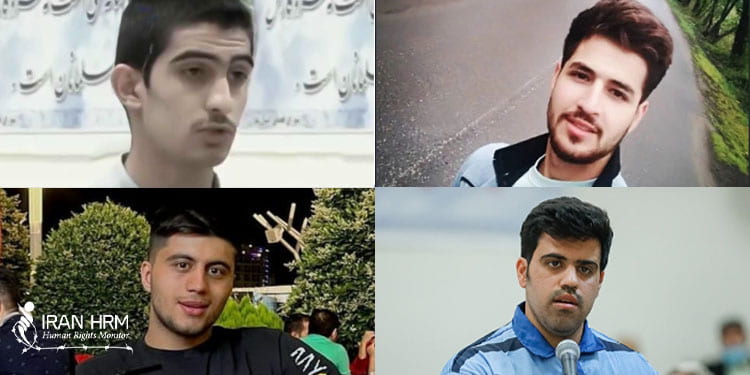 Death decrees handed down for 4 protesters

The Revolutionary Court of Tehran issued two separate statements announcing the death decrees for four protesters. The defendants’ names are not mentioned in these statements but reports and documents from previous trial sessions do indicate some names. Names of individuals such as Mohammad Ghobadlou, Mohammad Boroughani, Sahand Noor Mohammadzadeh, and Mahan Sedarat Madani.

The Revolutionary Court of Tehran announced in a statement issued on November 16, 2022, that it had issued death sentences for three defendants. The statement did not mention any names. However, from previous reports from trials held for Iran protesters it could be concluded that the death decrees have been issued for Mohammad Ghobadlou, Mohammad Boroughani, and Sahand Noor Mohammadzadeh.

The first trial took place on Saturday, October 29, 2022. It was announced that the next session would be held on Monday, October 31, 2022, which never convened. The death decrees for these protesters were issued after only one trial session held in the absence of their lawyers.

The following day, the defendants’ families were summoned to the Revolutionary Court, where Judge Salavati informed them of the death decrees. Salavati also threatened the families to refrain from informing anybody about the sentences.

Sahand Noor Mohammadzadeh is sentenced to death for blocking the street and causing traffic.

The Revolutionary Court’s statement writes that the issued sentences are preliminary and can be appealed.

In another statement, the Revolutionary Court of Tehran announced a death sentence for another protester. The statement refers to a defendant who was sentenced to death on the charge of ‘moharebeh’ by using a cold weapon and causing fear.”

This statement does not mention the defendant’s name. It is clear though that from the charges given, the defendant is Mahan Sedarat Madani.

Mahan Sedarat Madani’s trial was held on November 3, 2022. At the trial session, the defendant stated that their intention was a peaceful demonstration and denied using a cold weapon.

The Iranian Judiciary has resorted to the ultimate cruel punishment of handing down death decrees in the absence of proper legal proceedings, and without the knowledge of the civil society and public opinion.

A group of UN experts have urged the Iranian authorities in a statement issued on November 11, 2022, to stop using the death penalty as a means of suppressing protests.

Saman Yassin (Seyyedi), a rapper from Kermanshah, has been on hunger strike since Wednesday, November 9, 2022. He protested his denial of visitation with his family as well as his condition of uncertainty while held in Tehran’s Evin Prison.

On the second day of his hunger strike, the Prosecutor’s Office in Evin Prison contacted his family and Saman was able to have a cabin visit.

During this visit, he did not explain to his family regarding the court proceedings and his condition in detention.

On October 29, 2022, the state-run news agencies announced the trial of several detained protesters. Saman Yassin also stood trial that day and a video of him making forced confession was published in the state media. The singer is charged with “moharebeh” (waging war on God) and “assembly and collusion with the intention of acting against state security.”

This raised concerns about the possibility of his receiving the death sentence. Saman Yassin was arrested on October 2, 2022 and is currently detained in Evin Prison.

Since his arrest, the Kurdish singer has been denied the right to have a lawyer of his own choice and subjected to severe physical and psychological torture for forced confessions.