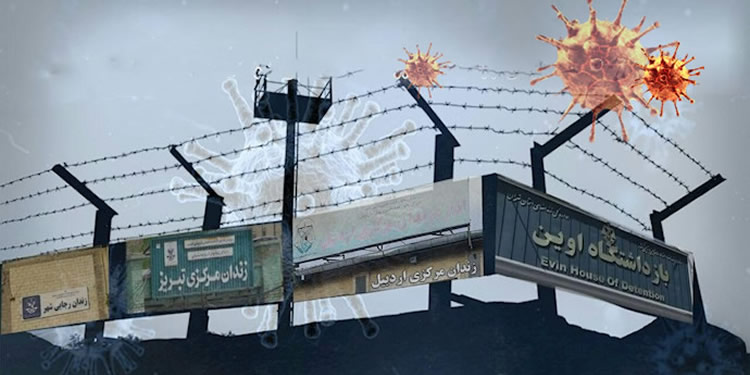 Even before the Covid-19 outbreak, the unsanitary conditions of overcrowded prisons in Iran spread infectious diseases among inmates.

Over the past year, as all signs indicated that the situation was going to be catastrophic, officials of the Iranian Judiciary did not take any measures to prevent the spread of the virus in prisons. So, the situation got out of control as the Coronavirus plagued all Iranian prisons.

Overcrowding of prisons, lack of ventilation, lack of hygiene and medical equipment, and deliberate overlooking of prisoner’s medical problems, turned Iranian prisons into a hotbed of the deadly contagion.

Numerous reports from various prisons across the country indicate that many prisons do not have access to sufficient disinfectants, masks and gloves. In most prisons, inmates could not procure disinfectant products even if they paid for it.

Repeated calls by international human rights institutions in the past months for the release of political prisoners during the Covid-19 Outbreak in prisons, have gone unheeded by the Iranian Judiciary.

The Iranian regime not only refrains from releasing political prisoners and prisoners of conscience, but it also arrests and detains more and more dissidents. In effect, the clerical regime took advantage of the outbreak to cause deaths of its opponents.

There are no accurate statistics available on the number of COVID-19 cases in prisons and the number of prisoners who got infected, were hospitalized or died, because the Iranian regime has not been transparent in this regard.

Nevertheless, news from inside prisons say that a large number of prisoners across Iran have contracted the virus. Every day, there are reports of deaths of inmates due to lack of medical and health resources.

In a press release on July 31, 2020, Amnesty International revealed official correspondence on the Covid-19 outbreak in prisons which contradicted official denials. It said: “The Iranian authorities must stop denying the health crisis in Iran’s prisons and take urgent steps to protect prisoners’ health and lives.”

“A Tsunami of death,” was how political prisoners detained in Evin Prison described the situation there in a letter after the outbreak of the contagion. The majority of prisoners in wards 4, 7 and 8 contracted the virus. The prison dispensary, however, gave them tranquilizers and returned them to the ward. The infected inmates were told: “Even if you test positive, we cannot let you stay in the clinic. Rest in the ward.” In this way, other inmates were also exposed to the virus and the number of cases increased. Evin’s dispensary kept only those who were in critical conditions.

Twelve of the 17 detainees in Ward 8 of Evin Prison tested positive on August 9, 2020. The inmates had been randomly picked. Ward 8 is where political prisoners are incarcerated.

The dispensary of the Great Tehran Penitentiary lacks essential medial resources. Recently, after some of the prisoners protested against the absence of nurses and doctors in the clinic, prison authorities sent a paramedic to the clinic of Ward 2. The clinic’s environment is contaminated, and even the infectious waste is not removed for several days. Prison authorities refused to give masks and disinfectants to inmates despite the outbreak. Lack of medical equipment, shortage of water and disinfectants, insufficient and low-quality food, and overcrowded cells are commonly reported.

In November, several political prisoners who had been arrested during the protests in November 2019 and detained in GTP, were denied medical treatment despite COVID-19 symptoms like fever, chills, dizziness, body ache, headache, diarrhea, and vomiting.

Qarchak Prison lacks the minimum living and health facilities. Its environment has been particularly contaminated during the Coronavirus outbreak. Qarchak inmates are at serious risk of contracting the virus. Numerous reports from this prison underline sub-standard hygiene, insufficient ventilation, odorous atmosphere, prevalence of vermin, salty water and low-quality food.

In last 10 days of July, three women committed suicide in Qarchak Prison for different reasons, including infection with COVID-19. Monireh Bahrami hanged herself with a chador (head-to-toe cover for women). She had been detained since April 2020 without standing trial. When she learned of her infection with Coronavirus, she committed suicide out of fear of its symptoms and the pressure she endured in prison.

COVID-19 disease spread in Adelabad Prison and took toll on inmates. Those infected with the virus were deprived of medical treatment in a suitable place and conditions. Prison authorities prevented dispatch of the sick inmates to civic hospitals. Despite widespread infection among inmates, prison authorities tried to cover up and prevent leaking out of accurate news.

On the health protocols in this prison, one of the inmates said: “The quarantine method in this prison is just a formality. New arrivals are supposed to be quarantined for 14 days but they are discharged to the wards before the end of this period. Some inmates are brought to the ward right after arrest and do not go through the quarantine… The air we breathe in this closed area is unhealthy. There are too many prisoners and the prison is overcrowded.”

Death due to illness was already high in the Central Prison of Urmia. With the outbreak of the Coronavirus, the situation became much worse. This is one of the prisons with the highest number of COVID-19 cases.

There is not even a single doctor in the CPU’s clinic to visit the sick inmates. Many sick prisoners are in critical conditions without access to a minimum medical treatment. There is only one nurse for the large number of CPU inmates. This nurse attends only to trivial things and is not able to respond to the needs of all those who refer to the clinic.

In light of the sub-standard conditions in the Central Prison of Urmia with regard to health protocols, and given the outbreak of the coronavirus, many inmates are in critical physical conditions and need to receive medical treatment but are deprived of it.

Inmates in Vakilabad or the Central Prison of Mashhad are deprived the most basic health resources to prevent the spread of the virus. The minimum health requirements do not exist in the various wards of this prison. In addition, social distancing is absolutely not possible in this prison because of the large number of prisoners in this prison.

The authorities do not provide disinfectants and liquid soap to the inmates. The only measure they take with regards to sick prisoners is to quarantine them without providing them the necessary medical treatment. The only medicine prescribed by the prison doctors is for fever and headache.

In November 2020, an informed source said that several inmates died every day in this prison because of the Coronavirus. But prison authorities prevent this news from leaking out and state “natural death” as the reason for death. They do not carry out COVID testing in this prison.

Sanitary conditions have been reported as being really dire in Sepidar Prison of Ahvaz. Inmates are packed in small cells which are not built for so many prisoners. This situation leads to the spread of many diseases among the detainees who are deprived of their most basic needs.

The toilets and the sewage system are problematic. The prison cells are full of lice, insects and cockroaches. The meals are of very low quality.

One of the women released from this prison explained the sanitary conditions there: “There is no doctor or nurse in the center for women’s health on most days of the week. The number of suicide attempts among female prisoners is seriously on the rise. The women who attempt to take their own lives hope to be transferred to the medical center so that they could spend several days in a place with better conditions or eventually die.”