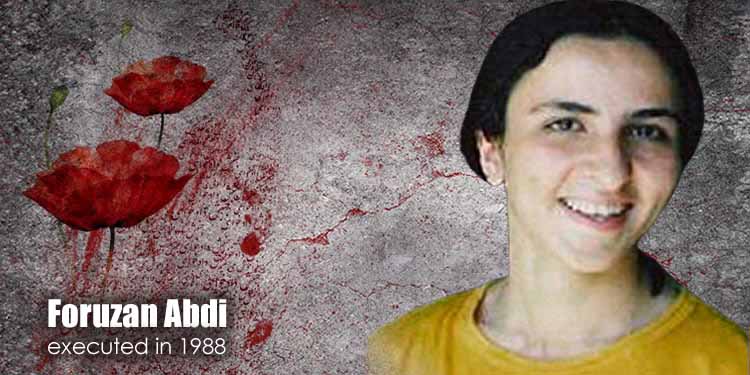 Foruzan Abdi was born in Tehran in 1957.
She was the captain of the National Volleyball team and a supporter of the People’s Mojahedin Organization of Iran (PMOI/MEK).

Her cellmates remember her for her open-mindedness and tolerant attitude towards other political prisoners. In one instance, her cellmate recalls, when a repenting prisoner who was in charge of the cell ordered another prisoner to separate her dishes from the others (because prison authorities treated prisoners who did not believe in God as “unclean”), Foruzan Abdi had intervened and stressed that “no one considers the prisoner as ‘unclean’ and whoever does, should separate her own dishes from others”. Foruzan Abdi had also kept her athletic spirits during her years of imprisonment and organized volleyball games during the short period when female prisoners had access to a volleyball court at Qezelhesar prison.

Arrest and detention of Foruzan Abdi

She was arrested in 1981.
One of her cellmates saying: “I saw her in section 8 of Qezelhesar in 1982. It was a section for special punishment and sometimes there were 25 to 30 people in a cell [that was meant to fit 3]… They placed Foruzan and some others in a restroom in early 1983. The place was so dirty that all of them contracted skin diseases. Then, they were transferred to solitary confinement at both Raja’i Shahr and Qezelhesar prisons where they stayed until early 1986.”

Foruzan Abdi was protesting against the inhuman rules and mistreatment of prisoners. As a result, for almost a year and half (fall 1983 – winter 1984), she was held in solitary confinement and was deprived from fresh air time, having contacts with others, reading newspapers, regular visits with her family.

Sometime in 1986, Foruzan Abdi was transferred from Raja’i Shahr to Evin prison where she was detained until her execution. During this period, she also spent most of her imprisonment in the closed section of the ward that prison authorities used for punishing prisoners. Those held in this section were held in closed cells and were allowed to leave their cells 3 times a day (for 30 minutes), during which time they could use the bathroom, wash their dishes and their clothes.

Foruzan Abdi was executed along with 30 000 other prisoners, mostly PMOI, when the Iranian regime carried out the massacre of political prisoners in the summer of 1988.

Today, women are fighting to enter volleyball stadiums to watch games. Foruzan Abdi, member of national volleyball team was executed in 1988 by the Iranian regime for wanting all women to live in freedom and democracy.