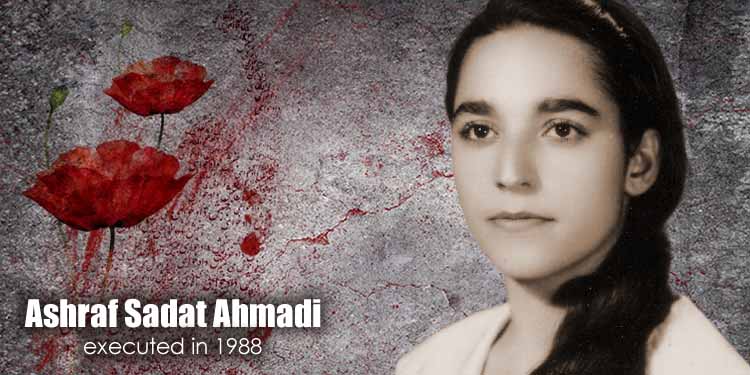 Ashraf Sadat Ahmadi was born in Tehran in 1941 and finished her high school education there.

While pregnant and suffering from severe heart disease, she was arrested in the summer of 1975 for her political activities during the despotic Shah’s era.

Under these circumstances, she gave birth to her daughter in Evin Prison and raised her for 5 months.

Ashraf was sentenced to 15 years in prison and was released a few months before the fall of the Shah’s regime.

After the revolution, when Khomeini came into power in 1979, Ashraf was once again arrested and imprisoned for being a member of the People’s Mojahedin Organization of Iran (PMOI/MEK).

Having experienced interrogation during the Shah’s era, Ashraf Ahmadi helped many female prisoners with advice to not let the interrogators extract confessions from them.

A report from Ashraf’s cellmate reads as follows: “In the summer of 1981, while being at ward 311 in Evin Prison, I heard about her capture. In the beginning of her arrest we were at different cells and we had no direct contact, but 8 months later we found ourselves together in room 4 in ward 240. Room 4 was full of adamant political prisoners. (Assadollah) Lajevardi, known as the butcher of Evin Prison, was quite sensitive due to the presence of Ashraf in this room. The situation was such that anyone returning from interrogation could not go and talk to Ashraf or establish a close relationship with her. As soon as the guards would notice or learned of such events, they would increase pressure on not only Ashraf, but on the other Mojahedin prisoners as well.”

She spent a decade (3 years during the shah’s reign with another 7 under Khomeini) as a political prisoner in Iran’s notorious prisons.

Three months after Ashraf’s execution, the regime’s agents informed her family and handed over her bag to her mother without saying a word about Ashraf’s burial place.