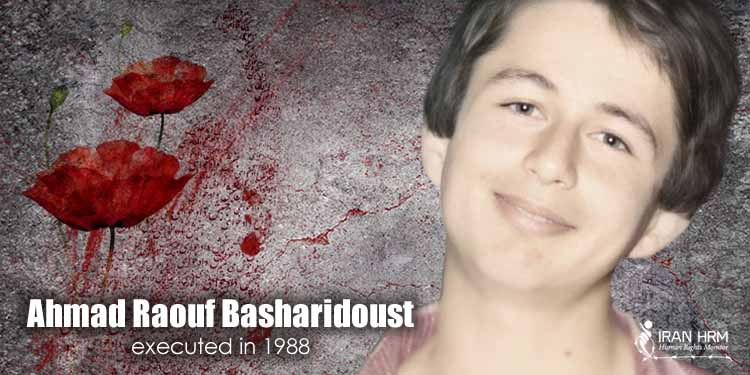 Ahmad was only 16 years old in 1980, when he was arrested by the Revolutionary Guard Corps (IRGC) in Rasht for the first time.

Between 1980 to 1981 he was arrested and tortured several times for having participated in meetings of the People’s Mojahedin Organization of Iran (PMOI), the democratic opposition to the mullahs.

In 1982 he was arrested at his home in a raid by the IRGC forces in Rasht, an important city located on the shores of the Caspian Sea.

In late 1982, after several rounds of interrogation and torture, Ahmad was sentenced to five years in prison by Moghadassi-Far, a notorious judge in the town of Rasht.

On March 12, 1983, the IRGC set fire to this prison and opened fire on political prisoners trying to escape the flames.

Seven prisoners affiliated to the PMOI perished in the fire. Ahmad who lost consciousness was saved by a prisoner.

But a few months later, in June 1983, Rasht’s prosecutor, unable to break the prisoners, decided to send 40 prisoners including Ahmad to exile. Ahmad was transferred to Evin in Tehran, then to Gohardasht Prison in Karaj.

“In 1984 I finally got a very short visit. Ahmad had signs of torture and beatings. He told me very quickly what had happened and how they had tortured him during the month of Ramadan while he was fasting,” one of Ahmad’s relatives said.

“Ahmad asked me to report their strike to the PMOI. They had gone on hunger strike to protest the inhuman conditions in prison and mistreatment of prisoners.”

Ahmad was released after almost 6 years in prison in March 1988 and was seeking to leave the country to join the PMOI.

In March 1988, he wrote to his sister about the conditions of his detention “If I wanted to tell you all that I lived during these years, I could write volumes, so let us leave the account of this forced journey and these pains endured for another time.”

Two or three months later he falls into an intelligence ministry trap without knowing it. He was arrested again and taken under torture. This time he was imprisoned in the northwest city of Urmia.

In August 1988, members of the IRGC transported political prisoners, mostly PMOI members, including Ahmad, to the hills surrounding Lake Urmia using two minibuses. The prisoners were told that they would be transferred to Tabriz Prison.  Agents of the IRGC had previously isolated the site of execution in the hills; they were armed with various bladed weapons, machetes, clubs, knives, hatchets and axes.

The prisoners were chained and handcuffed; they were literally massacred by the Pasdaran.  Villagers who heard the screams of the PMOI prisoners being savagely slain headed for the hills but were arrested and kept away by heavily armed IRGC members.

In 1991, intelligence agents told his father that they had executed him in Urmia Prison in northwest Iran, but they did not reveal where they had buried him.

In prison, he wrote poems:

The book “A Little Prince in the Land of the Mullahs” is based on the life of Ahmad Raouf Basharidoust.