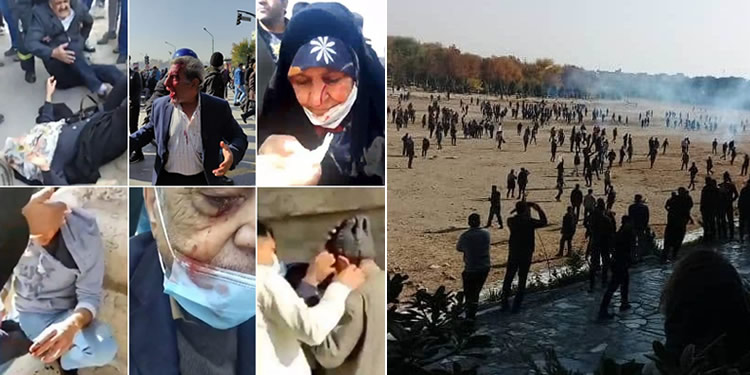 On Friday, November 26, 2021, government troops and anti-riot guards attacked the sit-in protest of farmers in the dried up riverbed of Zayanderud in Isfahan.

Many farmers and citizens were wounded and arrested in this raid.

The State Security Force and its special units were stationed in three locations around the Khajou Bridge and on the roads leading to Zayanderud to prevent people’s gathering.

Security and intelligence forces had sent threatening text messages to the public warning them against participating in the farmers’ protest on Friday, November 26.

Isfahan farmers started their sit-in protest since November 7 in protest of the regime’s failure to implement efficient plans for water distribution.

On Friday, November 19, thousands of residents of Isfahan joined Isfahan farmers’ protest upon the latter’s call. They held a gathering on the Khajou Bridge and on the riverbed of Zayanderud.

Previously, in the early hours of Thursday, November 25, anti-riot forces and special units ran through the farmers’ tents with motorcycles, firing tear gas and setting fire to the tents.

In the preceding nights, plainclothes agents had attempted to disperse the farmers and end the sit-in by tearing their posters and damaging their tents.

On Friday, November 26, anti-riot guards and plainclothes agents launched an extensive crackdown on farmers and citizens of Isfahan who had joined their sit-in. They fired tear gas and used pellet guns. They ran over the public with their motorcycles. A large number of citizens were injured. More were arrested.

By Saturday, November 27, at least 100 of Isfahan’s citizens had been wounded in the confrontation and more than 300 had been detained.

The people of Shahrekord also held an extensive protest on November 21 in solitary with and support for the farmers’ sit-in in Isfahan, and in protest of lack of water. The protest in Shahrekord continued for several days.

November also saw widespread arrests in Iran, executions in various prisons, and arbitrary killings. Following is a glance at some areas of violations of human rights in Iran.

At least 28 prisoners were executed in various Iranian prisons in November.

On November 23, a husband and wife were executed in the Central Prison of Yasuj on the charge of murder. The man was identified as Siavosh Ardeshiri.

On November 25, 2021, Maryam Khakpour was executed on drug-related charges in Dastgerd Prison of Isfahan.

In the morning of November 24, 2021, the death sentence for Arman Abdolali was carried out in Rajaii Shahr Prison of Karaj. Arman’s sentence was carried out despite international and domestic outcry and while his case contained many ambiguities.

Arman Abdolali had been taken to solitary confinement seven times before to prepare him for execution, a practice that is tantamount to torture.

The Iranian regime embarked a wave of arrests in various cities across the country during November.

Security forces arrested many Kurdish citizens in the cities of Baneh, Marivan, Saqqez, and Sanandaj between November 11 and 14.

Government agents made the arrests without providing written judicial warrants. The arrests were accompanied by violence and insults. The agents ransacked the residences of these Kurdish citizens and confiscated their belongings.

In some cases, the forces used drones to identify and pursue these individuals. They also used ambulances in order to transfer those arrested.

Political prisoners faced various restrictions including denial of access to medical treatment, making phone calls, and visitations with their families.

In the Central Prison of Karaj, political prisoner Mohammad Ashtiani has a heart condition. He must take specific medicines every day. The head of the prison, however, does not allow him access to the vital medicines his family procures for him.

He is sentenced to three years imprisonment and a heavy cash fine on charges of propaganda against the state, insulting the mullahs’ leader, and supporting the People’s Mojahedin Organization of Iran.

In yet another example in the Central Prison of Urmia, political prisoner Behrouz Shaker has been on hunger strike since November 21 in protest of the pressures imposed on the plaintiffs in his case to withdraw their consent.

Mr. Shaker ended his hunger strike after he was given promises to fulfill his demand.

In the Central Prison of Sanandaj, political prisoner Houshmand Alipour has been on hunger strike since November 16, in protest of the Intelligence Ministry’s interference in his case and for being deprived of the right to leave.

At least nine Iranian citizens were arbitrarily shot and killed by security forces in November.

On Tuesday, November 2, for example, security forces shot Veissi Badini on the border of Urmia without warning. Mr. Badini, from Surkan village in Mergur region, was married with two children. At the time of the shooting, he had taken his livestock to graze in that area. Government forces killed the man and confiscated his livestock as well.

At least 18 citizens were wounded in November because of arbitrary and indiscriminate shooting by security and military forces.

No news on Abbas Ali Ramezani after one month