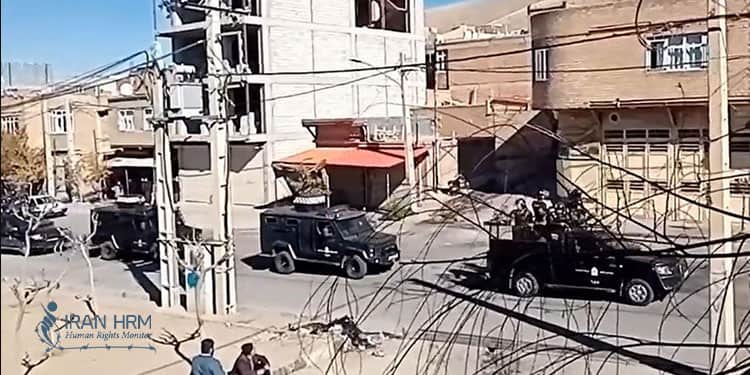 Over the past three days, Iran’s authorities have launched heavy attacks on Kurdish cities in western Iran. These attacks have caused mass casualties and destruction, which are continuing.

In his speech on Saturday, November 19, 2022, Ali Khamenei stated that the Revolutionary Guards (IRGC) has launched heavy attacks on Iran’s Kurdistan Province as well as other Kurdish cities. Reports indicate a massacre in Javanrud city, Kermanshah Province, NW Iran.

The state security and special forces transferred military weapons and armored vehicles into the city of Mahabad on Saturday night. The city’s power circuit was cut off and the forces relentlessly fired at people’s homes in the streets. Extensive damages were caused, and the resident’s shops and homes destroyed.

The sound of gunfire was heard from all parts of the city. State forces arrested mass numbers of people and youths. The attack against the people of Mahabad carried on Sunday, November 20, 2022.

On Saturday, November 19, 2022, security forces used arms on peaceful protesters in the cities of Sanandaj, Marivan, and Divandarreh. Many of these protesters were killed and wounded.

Plainclothes forces stormed the town of Villa Shahr in Sanandaj and destroyed people’s homes and vehicles. Gunfire could still be heard throughout the city by late hours of Saturday night.

State mercenaries raided the people of Piranshahr in the streets with gunshots. One citizen was seriously injured when hit by direct shooting.

On November 20, 2022, the state-run rajanews.com wrote, “The security forces entered the area last night. They observed, identified, and arrested the riot leaders… The majority of those involved in the past day’s riots have been arrested.”

Eyewitnesses in Javanrud reported of military forces use of arms and semi-heavy weaponry to shoot young people and women.

A citizen said that people were targeted with the heavy machine gun, Dushka (DShK), and helicopters were flying over the city.

At least six civilians were killed by direct shots during attacks on Kurdish cities on Sunday, November 20, 2022.

Bahauddin Veisi, 16, and Irfan Kakaei, 45, were killed in Javanrud. Irfan was a sports teacher at the city’s Education Department. He was shot with two bullets, to his head and chest as he returned from the Mosque.

Bahauddin Veisi’s brother, Najmuddin, who was seriously injured, was kidnapped by state forces.

Karvan Qader Shokri, 16, and Tahir Azizi, 30, were shot and killed in Piranshahr. As the crowd of people who carried Karvan’s body to the village mosque in Shinabad, another citizen, Jalal Ghorbani, was also shot and killed by state forces.
Mohsen Niazi, a 25-year-old from Dehgolan, Piranshahr, passed away in Kosar hospital suffering serious injuries after being shot on Sunday.

Iran Human Rights Monitor calls on the United Nations, the Security Council, and human rights organizations to take immediate action to stop the Iranian authorities and the IRGC from killing defenseless people in the cities of Kurdistan Province.