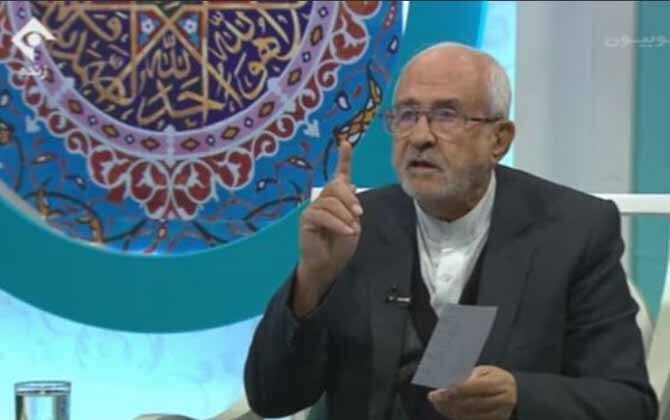 In a program aired by Iran’s state TV (Islamic Republic of Iran Broadcasting- IRIB) a so-called “Quran expert” said that those who were arrested in the recent anti-government protests must be punished by cross amputation of their hands and feet in public.

Abolfazl Bahrampour who was introduced as a “Quran expert” stresses on cross amputation for those arrested during the protests and said they must suffer; their hands and feet must be amputated, and they must be executed or punished at the very site of their crime.

Bahrampour made the hideous remarks on a daily program on IRIB, stating hanging the protesters or maiming them by “cutting them into pieces, right hand together with the left leg” and then releasing them into the society and declared that those who had participated in the protests should be “exiled to a broken ship in the middle of the sea and live there until they die”.

Bahrampour claimed that he speaks based on Quranic verses and “nobody can accuse him in future.”

He said “Quran should be correctly interpreted. It says, one, they should suffer as they are killed. Not just killed. This is what the verse says. Our great scholars are very found of interpreting. Correct me if I’m mistaking in my translation. They should suffer as they are killed. They should be hanged… Listen, if one of these rulings are carried out, it will be a lesson for others, and they will not dare do anything. This must be carried out in public. They should be executed or punished at the very site of their crime. Then it says they should be horrifically amputated. Their right hand and left foot. This is serious. Four fingers from the rights hand should be cut off and the toes of the left foot. Then they should be set loose in the society. And they should be evicted from the country. This doesn’t mean being sent to Shiraz with its good weather. Send them somewhere in the middle of an ocean on an old worn-out ship. They should live there until they die.”

Abolfazl Bahrampour, a so-called “Quran expert” stresses on cross amputation for #IranProtesters on #Iran’s state TV and said they must suffer, their hands and feet must be amputated & they must be executed or punished at the very site of their crime!”#IranProtests pic.twitter.com/UKCGWqalle

According to information gathered from human rights sources and reports published by the state media, at least 10,000 protesters, many after they were injured by security forces, have been arrested during the recent protests over gasoline price hike in Iran.

Following the protests, Supreme Leader Khamenei called protesters “hooligans” in a televised speech. During the next few days, the regime mobilized all its forces against protesters, opening fire on gatherings. At least 450 were killed, including several children, while more than 4,000 were injured.

Several regime authorities have promised a harsh backlash against protesters.