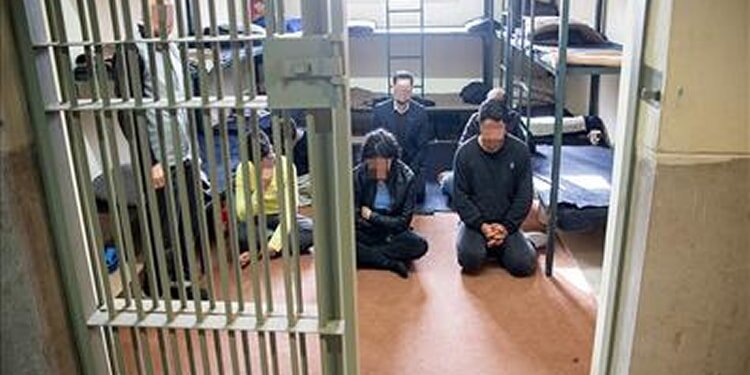 Beset by a whole host of economic, social, and political crises, the Iranian regime has been trying to rein in simmering social discontent by use of brute force.

There have been reports on death sentenced issued against young men for taking part in street protests, hand amputation sentences issued contrary to international law, lashing dissidents and prisoners being brutalized in Iran’s prisons.

On the other hand, the continued horrendous executions, including of political prisoners, to tighten up the general social atmosphere.

Hedayat Abdollahpour, a Kurdish political prisoner and father of two who was on death row based on false charges since 2018, was among those executed.

His family were informed on June 10 that their son had been secretly executed a few weeks ago in western Iran.

Judicial and security officials still refuse to hand over the body of the 27-year-old political prisoner to the grieved family or provide information about his burial place.

The execution was carried out even though one of the judges in the case had earlier told Hedayat’s attorney that he was innocent, and that the death sentence was a result of pressure from Iran’s Islamic Revolutionary Guards Corps.

Meanwhile, upholding death sentences against peaceful protesters has been considered as a crisis point in the situation of human rights in Iran and an attempt on the part of the ruling regime to silence any voice of dissent.

Amir Hossein Moradi, Saied Tamjidi, and Mohammad Rajabi were sentenced to death after unfair trials headed by Abolghasem Salavati in Branch 15 of the Revolutionary Courts in Tehran. Salavati is known for his long history of issuing death sentences for political prisoners and other regime dissidents.

The three political prisoners have in all their court hearings protested being placed under vicious torture.

The U.S. State Department spokesperson Morgan Ortagus in a tweet on June 25 condemned the death sentence.

“The U.S. strongly condemns Iran​’s decision to sentence Amir-Hossein Moradi, Saeed Tamjidi and Mohammad Rajabi to death,” Ortagus wrote in her tweet and added: “These protesters were ​reportedly beaten, denied lawyers, and coerced into false confessions. Iran must respect human rights and stop these executions”.

Elsewhere in Isfahan Province, the Head of the Justice Department said eight individuals were sentenced for “corruption on earth”, a charge carrying the death sentence according to Iran’s Islamic Penal Code.

Mohammed Reza Habibi announced the sentences during a speech before Friday prayers sermon on June 29 in Isfahan without naming the protesters.

He also warned Iranians that if major protesters such as in 2009, January 2018 and November 2019 erupt again, we will “deal decisively with rioters”.

“We will be decisive against mercenaries and rioters if crimes are committed like what happened in 2009, 2017 and last November” Habibi said, adding that eight trials have finished and those involved have been sentenced for corruption on earth”.

The flogging sentence for Mohamamd Bagher Souri, detained during the nationwide November 2019 protests was carried out on June 8 in the Great Tehran Penitentiary, also known as Fashafuyeh Prison.

On June 8, two men were flogged for taking part in the November 2019 protests in the city of Urmia, northwestern Iran. Azerbaijani rights activists Ali Azizi and Eliar Hosseinzadeh, were lashed 20 times for “disturbing public order”.

On June 5, a man in southwestern Iran was flogged 55 times for criticizing and “refusing to apologize” to the local representative of the regime’s Supreme Leader.

A court sentenced 42 workers in the western city of Arak to lashes and prison for demanding their unpaid wages in a protest. The workers are from AzarAb Industries, a large manufacturing and construction company located in the western province of Markazi.

A Revolutionary Court in southwestern Iran also sentenced a student to eight years in prison and 74 lashes for protesting Iran’s downing of a Ukrainian passenger plane. According to the sentence issued by the 1st Branch of the Revolutionary Court in Shiraz, Siavosh Nourozi Jafarlou was sentenced to seven years of prison for “assembly and collusion with the intention of disrupting internal security” and “insulting the leader Ali Khamenei”.

At the same time, three individuals were sentenced to amputation on charges of petty crimes.

According to Iran’s Islamic penal code, theft “on the first occasion” is punishable by amputation of the “full length of four fingers of the right hand in such a manner that the thumb and palm of the hand remain”.

There were reports of at least two prisoners being tortured to death.

In several prisons and jails with rapidly escalating outbreaks, basic protocols to prevent the virus from spreading were ignored.

Some prisoners sick with coronavirus complained that they were not getting enough food and water while quarantined, and that they did not have access to doctors, temperature checks, basic medicine, regular showers, or sanitary supplies.

Inmates from various prisons and their family members said that hundreds live in close wards, unable to maintain distance while sharing bathrooms and sometimes sleeping in prisons’ corridors due to lack of beds and space.

A second COVID-19 wave has engulfed the central prison of Zahedan in southeast Iran and dozens of inmates in wards 2, 7 and 8 have contracted the illness.

Seventeen inmates held in one cell of ward 7 have all now contracted COVID-19. The names of a number of these prisoners in ward 7 who have contracted the virus are Mahmoud Rigi and Adris Rigi. Another inmate, Shakour Kikhah, from ward 8 of Zahedan Central Prison has also contracted the virus.

Coinciding with the spread of COVID-19 in Zahedan Central Prison of Sistan and Baluchistan Province authorities cut off water to these inmates for a week in June, leaving the prisoners in atrocious hygiene conditions. Signs of coronavirus have already been witnessed in various wards and left a number of the inmates dead.

The number of inmates in these wards is many times above the capacity and there are reports of prisoners suffering from malnutrition.

Reports from the city of Isfahan indicate COVID-19 is spreading in the city’s Dastgerd prison and officials are going the distance to prevent any news from leaking out from inside the facility. Many patients in just one ward have contracted the novel coronavirus, reports indicate. They are ill with fevers and severe coughing.

Authorities reportedly transferred these inmates to an unknown location on June 13, after taking their temperatures. The site may be one of the hospitals in Isfahan.

One credible source said ward 5 of this prison has now been evacuated and closed off. Prior to this there were 150 inmates in this ward and now there is no information about their whereabouts. There is a probability that most of these inmates have contracted COVID-19.

It is worth noting that on May 8, judiciary officials closed down a detention center allocated for Dastgerd Prison that was used as a quarantine section. All the inmates returning from leave and new entrees were transferred to Dastgerd Prison. At the time there were warnings that this would lead to the spread of COVID-19 among the inmates.

Political prisoner Iraj Hatami who suffered symptoms like the Covid-19 disease, was sent to a civic hospital on June 16.

Other political prisoners with serious illnesses are detained in the same ward with Mr. Hatami and were in greater danger of contracting the disease.

many prisoners in all wards of Urmia Central Prison are showing coronavirus symptoms such as fever, sore throat, loss of smell and taste senses, and body aches. The lack of attention by prison authorities has resulted in the spread of the disease among prisoners. After repeated protests by prisoners, a few critical patients were tested, and they were diagnosed with COVID-19. The prisoners of Urmia are lacking the most basic hygienic products such as soap and sanitizers. These products are sold at very high prices, and most prisoners do not have the means to purchase them.